No Holds Barred: Kristen Worley on The WAAR Room with Chris Baldwin and Malissa Smith 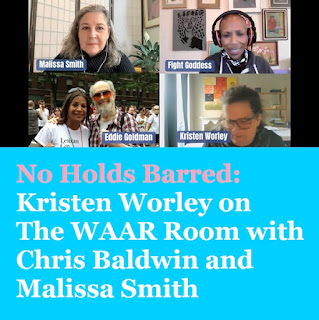 On this edition of No Holds Barred, host Eddie Goldman once again spoke with our colleagues Chris Baldwin of the WAAR Room and Malissa Smith of Girlboxing on the WAAR Room. A video of this discussion has also been posted on the WAAR Sports YouTube page.
We spoke with them by Zoom Monday, April 11.
Our guest was author and former elite waterskier and cyclist, Kristen Worley, to discuss and dispel the myths about transgender participation in sports.
Worley explained the complexities of the hormones that interplay in the human body, and how policies have been made, and continue to be made, across the spectrum of athletics without scientific study or evidence. In Worley's case, it led to her being the first athlete to be "gender tested" under the aegis of the International Olympic Committee's (IOC) Stockholm Consensus of 2003. The requirements of the "consensus" led to physical harm to her and other transgender athletes who were required to restrict their intake of necessary hormones or face expulsion from the very sports they love. In 2016, the Ontario Human Rights Tribunal recognized that IOC policies specifically requiring her to reduce her testosterone levels in order compete in female sport, not only made her ill, but infringed on her human rights.
Subsequent to this ground-breaking court case, Worley has worked with the IOC to develop a new framework for transgender athletes, which was released in November 2021. Much more work needs to be done, however, to overcome the deep prejudices, fears, and highly politicized atmosphere surrounding transgender rights.
We are grateful to Kristen Worley for providing us with a basic education on the issues transgender athletes face.
Please also subscribe to the No Holds Barred page on Patreon for much more exclusive premium No Holds Barred content.
You can play or download No Holds Barred on Anchor, Patreon, and the Internet Archive. If one link does not work, please try another.
The No Holds Barred theme song is called "The Heist", which is also available on iTunes by composer Ian Snow.