No Holds Barred: We Stand With Ukraine, on The WAAR Room with Chris Baldwin and Malissa Smith 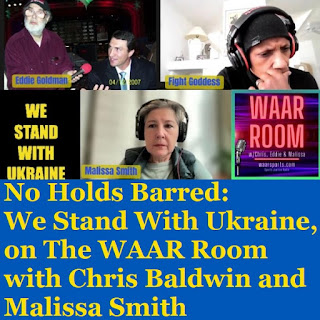 On this edition of No Holds Barred, host Eddie Goldman once again spoke with our colleagues Chris Baldwin of the WAAR Room and Malissa Smith of Girlboxing on the WAAR Room. A video of this discussion has also been posted on the WAAR Sports YouTube page.
We spoke with them by Zoom Sunday, February 27.
We discussed the need for a ban on Russia from world sports after Putin violated the Olympic Truce agreement and attacked Ukraine.
This is the third time since 2008 that Russia has violated the Olympic Truce and launched military attacks. Russia and its proxies attacked the country of Georgia in 2008 at the start of the Beijing Summer Olympics. Russia attacked Ukraine and annexed Crimea during the 2014 Sochi Olympics. Now mere hours after the Beijing 2022 Winter Olympics had concluded, Russia launched its vicious and illegal land, sea, and air assault on Ukraine.
A ban on Russia may mark the end of the era of all-inclusive world sporting events. But the price for continuing to include Russia and its gang of cheats, dopers, and murderers in world sport is the complete abandonment of any principles associated with real sport. And such inherently corrupt sports organizations do not deserve to exist. The sustainability of an Olympic movement including both democratic and authoritarian countries, where human rights do not exist, has long been questioned as well.
Please also subscribe to the No Holds Barred page on Patreon for much more exclusive premium No Holds Barred content.
You can play or download No Holds Barred on Anchor, Patreon, and the Internet Archive. If one link does not work, please try another.
The No Holds Barred theme song is called "The Heist", which is also available on iTunes by composer Ian Snow.