No Holds Barred: Russia, Ukraine, the Olympics, Kinahan, and Corruption, on The WAAR Room with Chris Baldwin and Malissa Smith 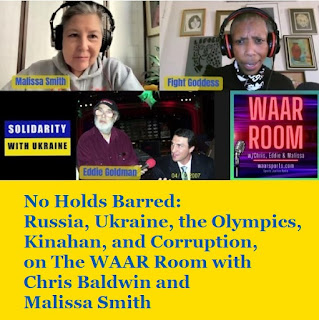 On this edition of No Holds Barred, host Eddie Goldman once again spoke with our colleagues Chris Baldwin of the WAAR Room and Malissa Smith of Girlboxing on the WAAR Room. A video of this discussion has also been posted on the WAAR Sports YouTube page.
We spoke with them by Zoom Monday, March 14.
Our wide-ranging discussion first focused on the continuing role of Russia in world sport, including in professional and Olympic boxing, even as Russia's war crimes and crimes against humanity in Ukraine intensify. We discussed revelations that Umar Kremlev, president of the Olympic boxing federation IBA, has a history of ties with the Russian motorcycle club Night Wolves. Since 2014, the Night Wolves have been been under sanction by the the U.S. Treasury Department: "The Night Wolves have been closely connected to the Russian special services, have helped to recruit separatist fighters for Donetsk and Luhansk, Ukraine, and were deployed to the cities of Luhansk and Kharkiv." The IBA also has kept Gazprom, the Russian state-owned energy company, as a "general partner". And in professional boxing, Russian fighters like Dmitry Bivol still get major fights, despite worldwide boycotts against Russian sports organizations and athletes because of Putin's criminal war of aggression against Ukraine.
We also discussed the increasingly prominent role of Daniel Kinahan, the alleged Irish head of an international drug cartel, in boxing. While the Irish media has been exemplary in exposing Kinahan, most of the world boxing media either remains silent about him or tries to cover up his real role. Kinahan is holed up in Dubai, which has not yet extradited him to Ireland. But Dubai is now hosting more and more major fights.
Also, we discussed how all this corruption means that there is no longer a basis for fair, all-inclusive world sport, and that the Olympic movement, which is collapsing, needs to be replaced. We discussed the role of gambling in boxing, sportswashing, how boxing is becoming so expensive to watch that it has become a luxury sport, and much more.
Please also subscribe to the No Holds Barred page on Patreon for much more exclusive premium No Holds Barred content.
You can play or download No Holds Barred on Anchor, Patreon, and the Internet Archive. If one link does not work, please try another.
The No Holds Barred theme song is called "The Heist", which is also available on iTunes by composer Ian Snow.