No Holds Barred: The Lesbian Fight Club, on The WAAR Room with Chris Baldwin and Malissa Smith 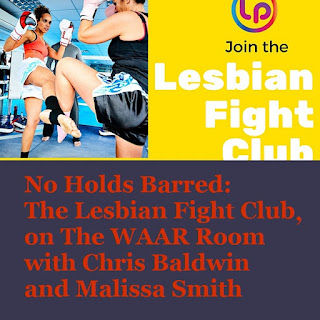 On this edition of No Holds Barred, host Eddie Goldman once again spoke with our colleagues Chris Baldwin of the WAAR Room and Malissa Smith of Girlboxing on the WAAR Room. A video of this discussion has also been posted on the WAAR Sports YouTube page.
We spoke with them by Zoom Monday, March 21. Our guest was Marna Deitch. We discussed both the Lesbian Fight Club and boxing.
The Lesbian Fight Club, which is not just open to lesbians, and which trains people in self-defense techniques. As the LGBTQI community remains under attack, it is critically important to learn self-defense.
Marna Deitch is the founder of the Motorcycle Contingent for Equality, an award-winning activist, a board member of the Lesbian and Gay Advisory Board of West Hollywood, and an executive board member of The L-Project, an art and tech 501(c)(3) organization promoting emerging LGBTQI women and non-binary creatives.
We also discussed the award-winning film, "Catch The Fair One", written by and starring boxer Kali Reis. And we discussed recent news about the Russian energy company, Gazprom, its sponsorship relationship with the IBA, and why amateur boxing may be dropped as an Olympic sport in the near future.
Please also subscribe to the No Holds Barred page on Patreon for much more exclusive premium No Holds Barred content.
You can play or download No Holds Barred on Anchor, Patreon, and the Internet Archive. If one link does not work, please try another.
The No Holds Barred theme song is called "The Heist", which is also available on iTunes by composer Ian Snow.