No Holds Barred: Kieran Cunningham on Bloody Sunday, the Mob and Irish Boxing, and Sports-Washing, on The WAAR Room with Chris Baldwin and Malissa Smith 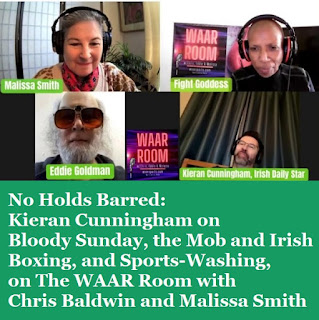 On this edition of No Holds Barred, host Eddie Goldman once again spoke with our colleagues Chris Baldwin of the WAAR Room and Malissa Smith of Girlboxing on the WAAR Room. A video of this discussion has also been posted on the WAAR Sports YouTube page.
Our guest was Kieran Cunningham, the Chief Sports Writer and Current Affairs Columnist at the Irish Daily Star. We spoke with him by Zoom Sunday, January 30, the 50th Anniversary of Bloody Sunday -- a bloody massacre when British soldiers opened fire killing 13 unarmed peaceful protesters in Derry, Northern Ireland.
Cunningham explained the significance of Bloody Sunday and its impact on the Irish boxing community, including retired boxer John Duddy, whose uncle, Jackie Duddy, a promising young amateur fighter, was the first person murdered.
As a sports writer, Cunningham is perhaps best known for his in-depth reporting on the impact of criminal gangs on boxing in the Republic of Ireland, including alleged drug kingpin Daniel Kinahan. Cunningham provided an in-depth analysis on the tentacles from MTK Global that have encroached on the integrity of the sport. He also discussed the impact of "sports-washing" in the Middle East including Saudi Arabia and Dubai, and how the absence of an international professional boxing governance organization continues to undermine the sport.
Please also subscribe to the No Holds Barred page on Patreon for much more exclusive premium No Holds Barred content.
Now you can also support our independent, No Holds Barred journalism by purchasing items such as T-shirts, hoodies, tank tops, mugs, pillows, masks, and even mini-skirts at the new No Holds Barred with Eddie Goldman shop on Redbubble. (It has also been recommended to me that people choose sizes on the large side, as some items may run small.) You can browse all the items for sale and then place an order here.
You can play or download No Holds Barred on Anchor, Podomatic, Patreon, and the Internet Archive. If one link does not work, please try another.
The No Holds Barred theme song is called "The Heist", which is also available on iTunes by composer Ian Snow.