No Holds Barred: Heather Hardy, on The WAAR Room with Chris Baldwin and Malissa Smith 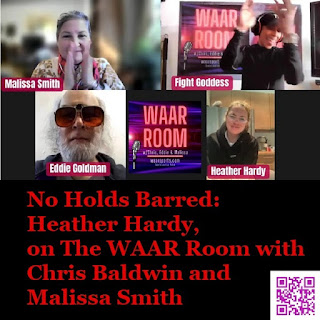 On this edition of No Holds Barred, host Eddie Goldman once again spoke with our colleagues Chris Baldwin of the WAAR Room and Malissa Smith of Girlboxing on the WAAR Room. A video of this discussion has also been posted on the WAAR Sports YouTube page.
Our guest was Heather "The Heat" Hardy.
We spoke with her by Zoom Sunday, January 23.
Heather "The Heat" Hardy, 22-2, returns to the ring on March 12th as the opponent against British fighter, Terri Harper, 11-1-1. Both are coming into the ring at lightweight after tough losses. Hardy concedes her last outing was less than stellar, but she feels a renewed sense of love for the sport of boxing and an excitement at the prospect of her first overseas adventure. She’s also looking forward to fight week and all the attendant media attention, something she has missed in the era of the pandemic. As she turns 40, Hardy reflects on the arc of her career, one that she started at the age of 28, but is neither ready to hang up her gloves, nor her place as an advocate for equity in the sport she loves. She may well be taking things one fight at a time, but it also mean she can be in love with boxing again.
The place of women's boxing also remains problematic, especially in the United States, where companies such as Al Haymon's Premier Boxing Champions seemingly refuse to put women's bouts on fight cards. This weekend was a case in point -- it came and went without women's boxing battle on a major outlet.
The PBC/Showtime Boxing broadcast did, otherwise, provide an excellent card headlined by Gary Russell, Jr., who lost his long time WBC featherweight title to Philippine fighter, Mark Magsayo. Russell, who had a torn ligament in his shoulder, fought one-handed for much of the fight, but still tried every pro trick in the book to keep his opponent at bay.
WAAR Room's Eddie Goldman also talked about latest No Holds Barred Patreon Page story, "Don King, Trevor Bryan, and A Return to Yesterday," and what that might mean for the cruiserweight and heavyweight divisions going forward.
Support independent journalism by subscribing, liking, and sharing this channel!!
The WAAR Room is committed to amplifying voices speaking out against racism, corruption, misogyny, and misogynoir in boxing, and the failures of sports' governing bodies to their protect athletes from corrupt practices.
Please also subscribe to the No Holds Barred page on Patreon for much more exclusive premium No Holds Barred content.
Now you can also support our independent, No Holds Barred journalism by purchasing items such as T-shirts, hoodies, tank tops, mugs, pillows, masks, and even mini-skirts at the new No Holds Barred with Eddie Goldman shop on Redbubble. (It has also been recommended to me that people choose sizes on the large side, as some items may run small.) You can browse all the items for sale and then place an order here.
You can play or download No Holds Barred on Anchor, Podomatic, Patreon, and the Internet Archive. If one link does not work, please try another.
The No Holds Barred theme song is called "The Heist", which is also available on iTunes by composer Ian Snow.