No Holds Barred: Claressa Shields, on The WAAR Room with Chris Baldwin and Malissa Smith 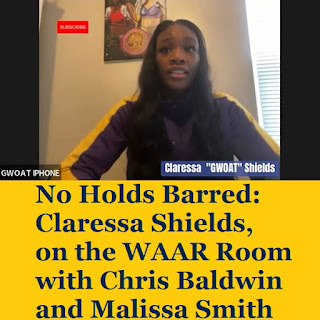 On this edition of No Holds Barred, host Eddie Goldman once again spoke with our colleagues Chris Baldwin of the WAAR Room and Malissa Smith of Girlboxing on the WAAR Room. A video of this discussion has also been posted on the WAAR Sports YouTube page.
Our guest was one of the top boxers in the world, multi-divisional champion Claressa Shields (11-0, 2 KOs). She is the first boxer in the four-belt era to be an undisputed world champion in two weight classes.
We spoke with her by Zoom Thursday, January 13.
On February 5, Claressa Shields is scheduled to defend her three middleweight belts against challenger Ema Kozin (21-0-1, 11 KOs). This fight will take place in Cardiff, Wales, in the U.K., and is the co-main event to the long-awaited middleweight fight between Chris Eubank Jr. and Liam Williams. In the U.K., it will be shown on Sky Sports. In the U.S. and Canada, it will be on pay-per-view on FITE.TV and PPV.com, and also on cable, satellite, and telco providers.
We discussed with her what she knows about Kozin and how she will approach this fight; how she hopes to fight in a few months against her nemesis, WBO champ Savannah Marshall; how she feels about this being her first pro fight outside the U.S. and in the U.K.; her reaction to several major American TV and streaming networks not featuring her championship fights; and more.
Please also subscribe to the No Holds Barred page on Patreon for much more exclusive premium No Holds Barred content.
Now you can also support our independent, No Holds Barred journalism by purchasing items such as T-shirts, hoodies, tank tops, mugs, pillows, masks, and even mini-skirts at the new No Holds Barred with Eddie Goldman shop on Redbubble. (It has also been recommended to me that people choose sizes on the large side, as some items may run small.) You can browse all the items for sale and then place an order here.
You can play or download No Holds Barred on Anchor, Podomatic, Patreon, and the Internet Archive. If one link does not work, please try another.
The No Holds Barred theme song is called "The Heist", which is also available on iTunes by composer Ian Snow.