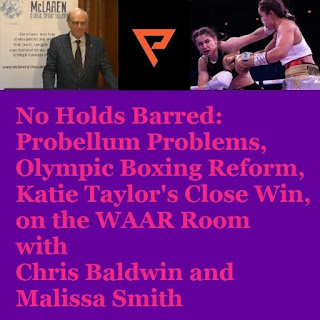 On this edition of No Holds Barred, host Eddie Goldman once again spoke with our colleagues Chris Baldwin of the WAAR Room and Malissa Smith of Girlboxing on the WAAR Room. A video of this discussion has also been posted on the WAAR Sports YouTube page.
We spoke with them Sunday, December 12.
This past week saw major developments in the attempt by the Olympic boxing federation -- formerly AIBA and now renamed as the International Boxing Association (IBA) -- to regain its place on the Olympic program.
On December 9, IOC president Thomas Bach said in a press conference that AIBA, along with the International Weightlifting Federation, were the IOC's "problem children". AIBA would remain suspended from the IOC until at least 2023, and needs to correct ongoing problems in governance, financial transparency and sustainability, and the integrity of their refereeing and judging processes. Boxing also was not included on the list of sports set for the 2028 Los Angeles Olympics, although it was not ruled out that it could be added back if AIBA demonstrated that it had corrected these problems to the IOC's satisfaction.
On December 10, another report was released about corruption in AIBA by the team led by Professor Richard McLaren. This report, issued at AIBA's behest, concluded that the corruption in the officiating at AIBA events did not end with the 2016 Rio Olympics, but has continued through this year. The report noted that "the people are the problem, even when the rules and regulations are of the highest quality. The sport will need to ensure that it cultivates individuals with integrity to run the organisation." It did also praise the efforts of current AIBA president Umar Kremlev and his associates to end this corruption, stating, "a genuine attempt at reform and progress has been made under Kremlev's leadership." McLaren then discussed this report on an international online press conference.
On December 12, before we were able to discuss it, AIBA held its "Extraordinary Congress" and adopted all the extensive reforms which had been proposed by the Governance Reform Group, which was led by Professor Ulrich Haas. These reforms included the establishment of an independent Boxing Integrity Unit. AIBA also officially changed its name to IBA at this congress. And on December 13, IBA president Umar Kremlev also held an international online press conference. We will discuss these developments on our upcoming shows.
Besides the crisis in Olympic boxing, we discussed the debut show of the new Probellum promotion, which took place December 11 in Dubai in the UAE. This show was plagued by numerous major governance problems, and we discussed the significance of these and the lack of proper regulation.
Also on December 11, there were several major boxing cards around the world. We mainly focused on the Matchroom/DAZN card in Liverpool in the U.K., and in particular on the successful defense of her lightweight belts by Katie Taylor against Firuza Sharipova. Taylor clearly won a decision, but this fight was closer than many had anticipated. We discussed what this means, what is next for Taylor, and the latest news in women's boxing.
All this is part of our in-depth coverage of the corrupt world of boxing and sports governance in general.
(Photo of Prof. McLaren from screenshot of press conference. Probellum logo. Photo of Katie Taylor vs. Firuza Sharipova from WBC.)
Please also subscribe to the No Holds Barred page on Patreon for much more exclusive premium No Holds Barred content.
Now you can also support our independent, No Holds Barred journalism by purchasing items such as T-shirts, hoodies, tank tops, mugs, pillows, masks, and even mini-skirts at the new No Holds Barred with Eddie Goldman shop on Redbubble. (It has also been recommended to me that people choose sizes on the large side, as some items may run small.) You can browse all the items for sale and then place an order here.
You can play or download No Holds Barred on Anchor, Podomatic, Patreon, and the Internet Archive. If one link does not work, please try another.
The No Holds Barred theme song is called "The Heist", which is also available on iTunes by composer Ian Snow.
No Holds Barred is sponsored by:
LenneHardt.com, the home of Lenne Hardt, the legendary MMA and sports announcer, voice actor, singer, actress, and comedienne. Lenne is also known for her jazz vocals with her Lenne Hardt Jazz Cabaret Band. For more information, to book her, or to order a custom message from her, go to LenneHardt.com.
Skullz Fight Shop, home of the Skullz Double-End Bag, the perfect punching bag for your combat sports training. Skullz Double-End Bags provide a realistic striking target, and help improve speed, distance, and timing skills. Hang it and hit it right out of the box! No pump required. Skullz Fight Shop - Advancing combat sports equipment for the next generation of fighters. For more information, go to https://skullzfightshop.com.
Adolphina Studios. Original art prints and handcrafted fine jewelry. For more information, go to https://www.etsy.com/shop/AdolphinaStudios. 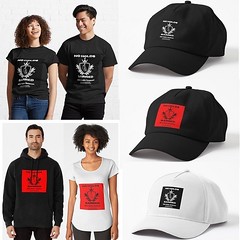