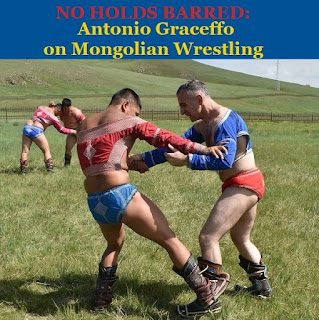 On this edition of No Holds Barred, host Eddie Goldman once again spoke with the writer, author, professor, and wrestler, Antonio Graceffo.
We spoke with him by phone Saturday, August 21.
Antonio Graceffo was born in Brooklyn, raised in Tennessee, and has been living for many years in Asia -- hence his moniker, the "Brooklyn Monk". He is currently located in Ulaanbaatar, the capital of Mongolia, where he teaches, writes, and wrestles.
In Mongolia, wrestling is a major sport in which many boys train and compete from a young age. The main style of Mongolian wrestling is known as Bokh. It is one of the main sports at the annual Nadaam festival. Since the 13th century and the days of Genghis Khan, the Nadaam festival has featured wrestling, archery, and horse racing. Although the coronavirus pandemic forced the festival to be cancelled this year, it is normally held each year in mid-July.
"The first official Nadaam was inaugurated by Genghis Khan himself," said Antonio Graceffo. "Each year when they celebrate Nadaam, it is not only the first anniversary of the first Nadaam, but it's also the anniversary of the foundation of the Mongolian empire."
While the main festivities are held in Ulaanbaatar, there are many local Nadaam festivals.
"Simultaneously, there are Nadaams happening in every province and every district of the country," he said.
"So arguably, Nadaam is the largest wrestling competition in the world, if we were to take all the Nadaams together across the whole country of Mongolia."
We discussed the long history of Mongolian wrestling, the rules of Bokh, why many Mongolians like Asashoryu and Hakuho have dominated Japanese sumo for many years, how urbanization and globalization are affecting Bokh with its rural roots, the growing challenges faced by Mongolian and many other indigenous styles of wrestling in today's sports and media environment, and much, much more. (Photo courtesy of Antonio Graceffo.)
Please also subscribe to the No Holds Barred page on Patreon for much more exclusive premium No Holds Barred content.
Now you can also support our independent, No Holds Barred journalism by purchasing items such as T-shirts, hoodies, tank tops, mugs, pillows, masks, and even mini-skirts at the new No Holds Barred with Eddie Goldman shop on Redbubble. (It has also been recommended to me that people choose sizes on the large side, as some items may run small.) You can browse all the items for sale and then place an order here.
You can play or download No Holds Barred on Podomatic and the Internet Archive. If one link does not work, please try another.
No Holds Barred is also available on these sites and apps:
Google Podcasts
Amazon Music
Apple Podcasts
Stitcher
Spotify
Anchor
The Podomatic Podcast Player app is available for free, both for Android at Google Play, and for iOS on the App Store.
The No Holds Barred theme song is called "The Heist", which is also available on iTunes by composer Ian Snow.
No Holds Barred is sponsored by:
LenneHardt.com, the home of Lenne Hardt, the legendary MMA and sports announcer, voice actor, singer, actress, and comedienne. Lenne is also known for her jazz vocals with her Lenne Hardt Jazz Cabaret Band. For more information, to book her, or to order a custom message from her, go to LenneHardt.com.
Skullz Fight Shop, home of the Skullz Double-End Bag, the perfect punching bag for your combat sports training. Skullz Double-End Bags provide a realistic striking target, and help improve speed, distance, and timing skills. Hang it and hit it right out of the box! No pump required. Skullz Fight Shop - Advancing combat sports equipment for the next generation of fighters. For more information, go to https://skullzfightshop.com.
Adolphina Studios. Original art prints and handcrafted fine jewelry. For more information, go to https://www.etsy.com/shop/AdolphinaStudios.