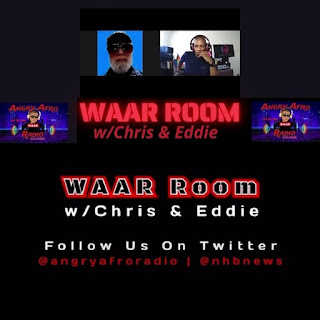 On this edition of No Holds Barred, host Eddie Goldman once again spoke with our colleague Chris Baldwin on the WAAR Room on Angry Afro Radio. Videos of this discussion have also been posted on the Angry Afro Radio YouTube page.
We spoke with her Thursday, July 1.
We discussed defending the rights of all LGBTQ athletes, including Caster Semenya, the South African runner and two-time Olympic gold medalist, who was kept out of the Tokyo Olympics by the discriminatory policies of World Athletics against intersex athletes, and weightlifter Laurel Hubbard from New Zealand, who is set to become the first openly transgender woman to compete in an Olympics. We strongly defended their human rights, and those of all other athletes, to play, fight, train, and compete.
The Tokyo Olympics are still set to start July 23, despite a new surge of Covid-19 cases in Tokyo and the rest of Japan, and even worse surges and lockdowns in many countries. We discussed how all these organizations which are involved in running what could very well be a major international superspreader event have betrayed the athletes and the public at large. We also discussed the weak slap on the wrist Russia received for its state-sponsored doping program, and how numerous Russian athletes are still slated to compete at the Tokyo Olympics. Plus, we slammed the theocratic and authoritarian Iranian regime for its ongoing attacks, threats, murder, and torture of Iranian athletes, and the forcing of Iranian athletes to throw contests to avoid facing Israeli athletes.
Moving over to the lovely world of professional boxing, we discussed the upcoming trilogy fight between Tyson Fury and Deontay Wilder on July 24, which few people want to see. We discussed its most likely outcome, and how it seems that Wilder has become unhinged leading up to this fight and what that may mean when they do fight. In addition, we discussed the potential fight between Anthony Joshua and Oleksandr Usyk, which has still not been officially announced, and what this means for the heavyweight division and a title unification fight between Fury and Joshua.
And we talked about racism and white supremacy in baseball, social audio apps including Cubhouse and Spotify's Greenroom, and more.
Please also subscribe to the No Holds Barred page on Patreon for much more exclusive premium No Holds Barred content.
Now you can also support our independent, No Holds Barred journalism by purchasing items such as T-shirts, hoodies, tank tops, mugs, pillows, masks, and even mini-skirts at the new No Holds Barred with Eddie Goldman shop on Redbubble. (It has also been recommended to me that people choose sizes on the large side, as some items may run small.) You can browse all the items for sale and then place an order here.
You can play or download No Holds Barred on Podomatic and the Internet Archive. If one link does not work, please try another.
No Holds Barred is also available on these sites and apps:
Google Podcasts
Amazon Music
Apple Podcasts
Stitcher
Spotify
Anchor
The Podomatic Podcast Player app is available for free, both for Android at Google Play, and for iOS on the App Store.
The No Holds Barred theme song is called "The Heist", which is also available on iTunes by composer Ian Snow.
No Holds Barred is sponsored by:
LenneHardt.com, the home of Lenne Hardt, the legendary MMA and sports announcer, voice actor, singer, actress, and comedienne. Lenne is also known for her jazz vocals with her Lenne Hardt Jazz Cabaret Band. For more information, to book her, or to order a custom message from her, go to LenneHardt.com.
Skullz Fight Shop, home of the Skullz Double-End Bag, the perfect punching bag for your combat sports training. Skullz Double-End Bags provide a realistic striking target, and help improve speed, distance, and timing skills. Hang it and hit it right out of the box! No pump required. Skullz Fight Shop - Advancing combat sports equipment for the next generation of fighters. For more information, go to https://skullzfightshop.com.
Adolphina Studios. Original art prints and handcrafted fine jewelry. For more information, go to https://www.etsy.com/shop/AdolphinaStudios.
# posted by Eddie Goldman : 2:09 AM