No Holds Barred: Charlo-Castaño, Bad Governance, and the Decline of Boxing, on the WAAR Room with Chris Baldwin 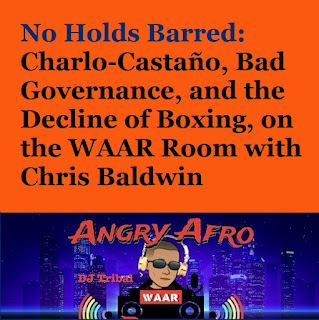 On this edition of No Holds Barred, host Eddie Goldman once again spoke with our colleague Chris Baldwin on the WAAR Room on Angry Afro Radio. A video of this discussion has also been posted on the Angry Afro Radio YouTube page.
We spoke with her Sunday, July 18.
There was an attempt on Saturday, July 17, to unify the four major belts in boxing's 154-pound division, as unbeaten fighters and belt holders Jermell Charlo and Brian Castaño fought in the AT&T Center in San Antonio, Texas, headlining a card shown on Showtime in the U.S.
After 12 rounds, the consensus seemed to be among boxing observers online that it was a good, close fight, but that Castaño had done enough to win.
The verdict, however, was a split draw. While many people accepted this decision since there were many close rounds and no fighter blew out the other, the score of one of the judges of 117-111 for Charlo was so ludicrous that Charlo himself even said it was too wide.
Both Charlo and Castaño said after the fight that they would welcome a rematch, but boxing's absurd system of multiple sanctioning bodies which each have their own mandatory challengers might prevent or delay that from happening any time soon, if ever.
The result was that there was an entertaining main event on an entertaining card, where the entertainment was ruined by the judging and overall lack of good governance in boxing.
We thus discussed this fight in this context of examining boxing's governance, how the general issue of governance is rarely discussed in boxing, how bad governance has been a major factor in boxing's decline, and what good governance constitutes. We also discussed new alternative forms of organizations for pro sports that are emerging, why sports organizations must work outside existing structures like the disgraceful International Olympic Committee, and much, much more.
Please also subscribe to the No Holds Barred page on Patreon for much more exclusive premium No Holds Barred content.
Now you can also support our independent, No Holds Barred journalism by purchasing items such as T-shirts, hoodies, tank tops, mugs, pillows, masks, and even mini-skirts at the new No Holds Barred with Eddie Goldman shop on Redbubble. (It has also been recommended to me that people choose sizes on the large side, as some items may run small.) You can browse all the items for sale and then place an order here.
You can play or download No Holds Barred on Podomatic and the Internet Archive. If one link does not work, please try another.
No Holds Barred is also available on these sites and apps:
Google Podcasts
Amazon Music
Apple Podcasts
Stitcher
Spotify
Anchor
The Podomatic Podcast Player app is available for free, both for Android at Google Play, and for iOS on the App Store.
The No Holds Barred theme song is called "The Heist", which is also available on iTunes by composer Ian Snow.
No Holds Barred is sponsored by:
LenneHardt.com, the home of Lenne Hardt, the legendary MMA and sports announcer, voice actor, singer, actress, and comedienne. Lenne is also known for her jazz vocals with her Lenne Hardt Jazz Cabaret Band. For more information, to book her, or to order a custom message from her, go to LenneHardt.com.
Skullz Fight Shop, home of the Skullz Double-End Bag, the perfect punching bag for your combat sports training. Skullz Double-End Bags provide a realistic striking target, and help improve speed, distance, and timing skills. Hang it and hit it right out of the box! No pump required. Skullz Fight Shop - Advancing combat sports equipment for the next generation of fighters. For more information, go to https://skullzfightshop.com.
Adolphina Studios. Original art prints and handcrafted fine jewelry. For more information, go to https://www.etsy.com/shop/AdolphinaStudios.