No Holds Barred: Mariah Holmes on Women in Sumo, U.S. Sumo Nationals, and Why Sumo is Special 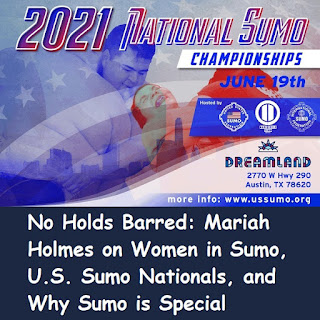 On this edition of No Holds Barred, host Eddie Goldman spoke with Mariah Holmes, a sumo wrestler, a member of the 2020 U.S. National Team, and a vice president and trustee of the U.S. Sumo Federation.
We spoke with her by phone Saturday, May 29.
Before starting to train in sumo in 2018, Mariah Holmes was a rugby player. While she no longer competes in that sport, she found that sumo was unlike rugby or any other sport in which she had been involved before.
"To me, sumo is not like every other sport. There's something really special about sumo," she said.
"With rugby, I've done sports before, and so I've always been an athlete. But I think even for people who aren't athletes, they come into sumo and you realize right away, so it's not just physical. Yes, there is a huge physical aspect. So if you're hardcore, you want to have sweating, and you really work your body. Yes, there's a physical aspect, and you hit hard those tachiais [note: the initial charge of the wrestlers which starts a sumo match].
"They're no joke. But there's also this mental aspect that I think a lot of sports are missing. And it's almost like I've heard it described as playing a physical game of chess.
"So you have to be always thinking about your opponent's move and what's going to happen next, and if I do this, what kind of position does it put me in. And so it's a very mental game."
Unlike professional sumo in Japan, women are both permitted and encouraged to participate in amateur sumo at all levels. But, she noted, there are still not enough women training and competing in sumo. Some sumo clubs and training sessions will just have one woman, meaning they must wrestle with men.
"We want to have hundreds of women," she said, and is involved with a women's commission for the U.S. Sumo Federation.
We also discussed the next major event for sumo in the U.S., the 2021 U.S. National Sumo Championships. This will be held Saturday, June 19, at Dreamland at 2770 W Hwy 290, Dripping Springs, Texas 78620, which is located about 23 miles west of Austin.
The next major events scheduled are the North American Championships in December, and the World Games in July 2022, in Birmingham, Alabama.
In addition, we discussed why sumo is such an artful sport, how it can grow its fan base in the U.S., how the sumo culture of respect and calmness sets it apart from most other sports, and much more.
Please also subscribe to the No Holds Barred page on Patreon for much more exclusive premium No Holds Barred content.
You can play or download No Holds Barred on Podomatic and the Internet Archive. If one link does not work, please try another.
No Holds Barred is also available on these sites and apps:
Google Podcasts
Amazon Music
Apple Podcasts
Stitcher
Spotify
Anchor
The Podomatic Podcast Player app is available for free, both for Android at Google Play, and for iOS on the App Store.
The No Holds Barred theme song is called "The Heist", which is also available on iTunes by composer Ian Snow.
No Holds Barred is sponsored by:
LenneHardt.com, the home of Lenne Hardt, the legendary MMA and sports announcer, voice actor, singer, actress, and comedienne. Lenne is also known for her jazz vocals with her Lenne Hardt Jazz Cabaret Band. For more information, to book her, or to order a custom message from her, go to LenneHardt.com.
Skullz Fight Shop, home of the Skullz Double-End Bag, the perfect punching bag for your combat sports training. Skullz Double-End Bags provide a realistic striking target, and help improve speed, distance, and timing skills. Hang it and hit it right out of the box! No pump required. Skullz Fight Shop - Advancing combat sports equipment for the next generation of fighters. For more information, go to https://skullzfightshop.com.
Adolphina Studios. Original art prints and handcrafted fine jewelry. For more information, go to https://www.etsy.com/shop/AdolphinaStudios.