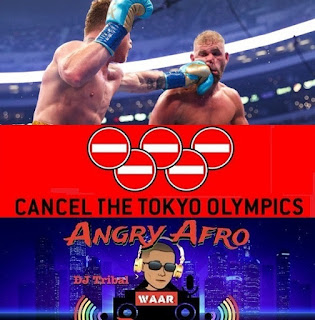 On this edition of No Holds Barred, host Eddie Goldman once again spoke with our colleague Chris Baldwin. This discussion will also be posted on the WAAR Room.
We spoke with her by phone Sunday, May 9.
On Saturday, May 8, Saul "Canelo" Alvarez stopped Billy Joe Saunders with an eighth-round TKO in front of a reported 73,000+ fans at AT&T Stadium in Arlington, Texas. Canelo displayed devastating power to defeat the previously unbeaten Saunders and cause multiple fractures to his orbital bone, necessitating surgery. With this win, the immensely popular Canelo, who already held two of the four major super middleweight belts, captured his third and cemented his status as the consensus top pound-for-pound fighter.
We discussed controversies emerging from this fight, including how the fight was progressing at the time of the stoppage, why it was correct for Saunders's corner to stop the fight when they did, why Saunders did not quit, how the view of some in boxing that fighters must "go out on their shields" is barbaric and antiquated, what might be next for Canelo in his quest to capture all four major super middleweight belts, and much more.
This past week also saw major developments in the fight to cancel the Tokyo Olympics, scheduled to begin July 23. A highlight was the posting of a petition in both Japanese and English, started by Japanese lawyer Kenji Utsunomiya, entitled "Cancel the Tokyo Olympics to protect our lives".
With much of Japan, including Tokyo, under its third state of emergency since the start of the coronavirus pandemic, as of Sunday, May 9, this petition has gotten well over 300,000 signatures, a record pace.
The petition notes that "as numbers show, the widespread outbreak of COVID19 has not at all been under control. While vaccination started at the end of last year, its distribution is limited to economically developed countries and thus the pandemic is far from over."
Japan is currently in its fourth wave of the pandemic. Coronavirus infections have been rising of late, including a record number of severely ill patients with severe symptoms due to the spread of more contagious variants. There has also been a very slow rollout of the vaccine in Japan. Dr. Kentaro Iwata, a physician, professor, and infectious diseases expert at Kobe University, was quoted as saying that "even thinking about the Olympics is just ridiculous" while he
lth workers in Japan's over-burdened medical system "are really fighting a life-and-death situation." We discussed the growing international opposition to the Tokyo Olympics, how this is a defining moment for sports activism, how the IOC oligarchs' plans endanger the health of both the people of Japan and the Olympic athletes, how the athletes will be screwed by the IOC's machinations whether the Tokyo Olympics go on or not, how plans to vaccinate Olympic athletes ahead of the elderly and ill in countries with limited or no access to vaccines is unjust and unfair, why athletes should plan their careers outside the failing and corrupt Olympic movement, and much more.
Please also subscribe to the No Holds Barred page on Patreon for much more No Holds Barred content.
(Photo of Canelo Alvarez and Billy Joe Saunders by Matchroom Boxing.)
You can play or download No Holds Barred on Podomatic and the Internet Archive. If one link does not work, please try another.
No Holds Barred is also available on these sites and apps:
Google Podcasts
Amazon Music
Apple Podcasts
Stitcher
Spotify
Anchor
The Podomatic Podcast Player app is available for free, both for Android at Google Play, and for iOS on the App Store.
The No Holds Barred theme song is called "The Heist", which is also available on iTunes by composer Ian Snow.
No Holds Barred is sponsored by:
LenneHardt.com, the home of Lenne Hardt, the legendary MMA and sports announcer, voice actor, singer, actress, and comedienne. Lenne is also known for her jazz vocals with her Lenne Hardt Jazz Cabaret Band. For more information, to book her, or to order a custom message from her, go to LenneHardt.com.
Skullz Fight Shop, home of the Skullz Double-End Bag, the perfect punching bag for your combat sports training. Skullz Double-End Bags provide a realistic striking target, and help improve speed, distance, and timing skills. Hang it and hit it right out of the box! No pump required. Skullz Fight Shop - Advancing combat sports equipment for the next generation of fighters. For more information, go to https://skullzfightshop.com.
Adolphina Studios. Original art prints and handcrafted fine jewelry. For more information, go to https://www.etsy.com/shop/AdolphinaStudios.
# posted by Eddie Goldman : 1:58 PM