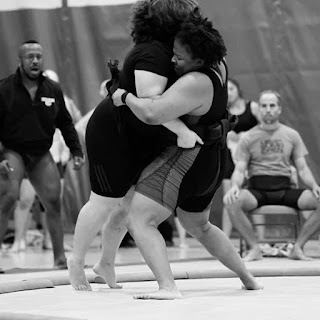 On this edition of No Holds Barred, host Eddie Goldman spoke with Eros Armstrong, the women's heavyweight sumo wrestler on the 2020 U.S. National Team.
We spoke with her by Skype Wednesday.
Based in Austin, Texas, Eros Armstrong has already found much success after competing in sumo for just a little over a year. Previously she had wrestled in high school and college, and trained in boxing and the hand-to-hand combat techniques of the military. But for her, sumo wrestling is special and "different from the brutality of boxing and American wrestling."
Sumo wrestling, she said, "when you step into that ring, it's like soul combat. It's the only way I can describe it.
"You go in there. You're getting in the zone. As soon as the clap happens, it echoes throughout your whole being. And whatever was a problem in the outside world just melts away. The only thing that's there is that center, your center. You're in the center of the center. And the person that is in there with you is going to move. That is all that matters, is that they will be moved, out of the center."
She added, "You can't really understand it until you do it. And that's the only way I guess I can explain soul combat."
Besides training for national and international competitions, and hoping that one day sumo becomes an Olympic sport, she is devoting particular energy to getting more women to compete in it. Towards that goal, she is working with her club, Dark Circle Sumo, in hosting the first Women's Invitational National Sumo Tournament, or W.I.N. Sumo Tournament, scheduled for March 6, 2021, in Austin. A women's sumo training camp is also being planned for before the tournament, all of which takes place right before International Women's Day 2021 on March 8.
"Women are built for sumo, especially with that lower body strength," she said.
"I hope you're going to tell your friends about sumo wrestling," she noted.
"If you've got sisters or aunties that you want to push around, get them to Austin, Texas, March 6, or before that so that they can get a little bit of a foundation in the sumo wrestling."
We also discussed more on how she first got involved with sumo, how her military and wrestling training were not nearly enough for sumo, how she was "extremely lucky" to find sumo, how she has learned so much from training with Justin Kizzart of Dark Circle Sumo, training and competing during the ongoing coronavirus pandemic, how sumo involves people from many different sports and backgrounds, the culture of respect in sumo, how she is dedicating herself to sumo, and much, much more.
Please also subscribe to the No Holds Barred page on Patreon for much more No Holds Barred content on the combat sports and martial arts, for only US$10 a month.
You can play or download No Holds Barred here and here. If one link does not work, please try another.
No Holds Barred is also available on these sites and apps:
Google Podcasts
Amazon Music
Apple Podcasts
Stitcher
Spotify
Anchor
The PodOmatic Podcast Player app is available for free, both for Android at Google Play, and for iOS on the App Store.
The No Holds Barred theme song is called "The Heist", which is also available on iTunes by composer Ian Snow.
No Holds Barred is sponsored by:
LenneHardt.com, the home of Lenne Hardt, the legendary MMA and sports announcer, voice actor, singer, actress, and comedienne. Lenne is also known for her jazz vocals with her Lenne Hardt Jazz Cabaret Band. For more information, to book her, or to order a custom message from her, go to LenneHardt.com.
Skullz Fight Shop, home of the Skullz Double-End Bag, the perfect punching bag for your combat sports training. Skullz Double-End Bags provide a realistic striking target, and help improve speed, distance, and timing skills. Hang it and hit it right out of the box! No pump required. Skullz Fight Shop - Advancing combat sports equipment for the next generation of fighters. For more information, go to https://skullzfightshop.com.
Adolphina Studios. Original art prints and handcrafted fine jewelry. For more information, go to https://www.etsy.com/shop/AdolphinaStudios.
# posted by Eddie Goldman : 4:08 AM