No Holds Barred: Jackie Silva of the #LetHerRun Movement on Caster Semenya and Gender Discrimination in Sport 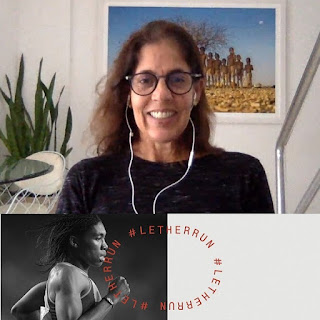 On this edition of No Holds Barred, host Eddie Goldman spoke with Jackie Silva, a 1996 Olympic gold medalist for Brazil in women's beach volleyball, of the #LetHerRun Movement.
We spoke with her by Skype Tuesday, Sept. 29.
Because of regulations devised by the Olympic federation World Athletics in 2018, all three medalists in the women's 800 meter finals at the 2016 Rio Olympics are presently barred from competing in this event at the Tokyo Olympics: gold medalist Caster Semenya of South Africa, silver medalist Francine Niyonsaba of Burundi, and bronze medalist Margaret Wambui of Kenya.
The excuse for banning these three Black African women is that they were all born with naturally higher than average testosterone levels than most women, and have sometimes been described as being intersex although they all identify as women. World Athletics wants them either not to compete, to compete in other events than those in which they specialize, or else to take unproven and likely dangerous drugs to lower their natural testosterone levels.
This racist, sexist, outrageous, and discriminatory regulation was upheld in 2019 both by the Court of Arbitration for Sport and the Swiss Federal Supreme Court. Numerous groups and individuals in world sport, as well as advocates for human rights, have denounced and protested against these decisions.
"The Let Her Run movement, the objective, is to allow Caster and the other two runners to run in the Tokyo Olympic Games, in their natural, physical condition, just like any women can run. That's why we started with this movement," said Jackie Silva.
"And the plan is to take the movement to all over the place, all of the people, to know and understand better their situation."
We discussed how all these three women runners "identify as women"; how male athletes' natural testosterone levels are never considered to be too high; the sordid and abusive history of sex testing of women in the Olympics; why sport should be about "inclusion" and "bigger than everyone"; trans athletes and those with "no gender" and how sport should "respect their human rights"; the need for athletes and their supporters to speak up and unite on all these issues; and much, much more.
If you are able to, please make a donation to support No Holds Barred so that the truth can still be told. You can do so at PayPal.me/nhbnews.
You can play or download No Holds Barred here and here. If one link does not work, please try another.
No Holds Barred is also available on these sites and apps:
Google Podcasts
Spotify
Amazon Music
Apple Podcasts
Stitcher
Anchor
The PodOmatic Podcast Player app is available for free, both for Android at Google Play, and for iOS on the App Store.
The No Holds Barred theme song is called "The Heist", which is also available on iTunes by composer Ian Snow.
No Holds Barred is sponsored by:
LenneHardt.com, the home of Lenne Hardt, the legendary MMA and sports announcer, voice actor, singer, actress, and comedienne. Lenne is also known for her jazz vocals with her Lenne Hardt Jazz Cabaret Band. For more information, to book her, or to order a custom message from her, go to LenneHardt.com.
Skullz Combat Sports Equipment, creator of the patented Skullz Double-End Bag, is the perfect punching bag for your combat sports training. Skullz Double-End Bags provide a realistic striking target, and help improve speed, distance, and timing skills. Hang it and hit it right out of the box! No pump required. Skullz Combat Sports Equipment - Advancing combat sports equipment for the next generation of fighters. For more information, go to https://instagram.com/skullzcombatsports and https://facebook.com/skullzcombatsports.
Adolphina Studios. Original art prints and handcrafted fine jewelry. For more information, go to https://www.etsy.com/shop/AdolphinaStudios.
# posted by Eddie Goldman : 1:43 AM