No Holds Barred: Steve Nelson on Shootfighting, Sambo, and Wrestling 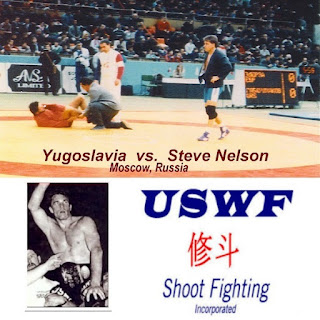 On this edition of No Holds Barred, host Eddie Goldman once again spoke with Steve Nelson, who fought in and ran the Unified Shoot Wrestling Federation (USWF). In the 1990s, the USWF ran a series of successful events, mainly in Amarillo, Texas, using shoot wrestling rules which allowed open-handed strikes, submissions, kicks, and knees.

Steve Nelson wrestled at Oklahoma State, won two world silver medals in sambo, had a judo background, came from a family of pro wrestlers, and fought in MMA. He was also the longtime head wrestling coach for both the boys' and girls' wrestling teams at Palo Duro High School in Amarillo.

Some two decades after USWF stopped running shows, there has been a recent revival of interest in it.

"Gong Magazine just did a six-page layout on myself and the USWF in Japan," he added.

While he finds it "hard to believe" that so many people are interested in a fight company that ceased to exist so long ago, he did offer some insight into why USWF remains intriguing to people.

"I think a lot of people miss it," he said, "and it might have to do with some of the stuff that's going on now and how the USWF was handled. We tried to be a company with class, and you don't always see that in today's companies. That's how we tried to handle the USWF because I knew all those guys were role models."

While there are no plans to revive the USWF or its style, he is interested in recent developments in the sport of sambo.

"I'm surprised that sambo hasn't grown more than it has," he said, especially in the U.S. That, however, may start to change. He noted that there are three sambo schools in the Arlington-Dallas, Texas, area, with plans to establish a professional sambo league. If problems such as lack of funding and the need for more sambo schools are resolved, "I think the United States would be in a very high level of everybody else if all this was funded," he noted.

We also discussed more on the history and legacy of USWF, the many obstacles to sambo being included on the Olympic program, and much more.