Amid the Coronavirus Pandemic and Protests Against Racism and Police Violence, Who Will Still Watch Boxing? 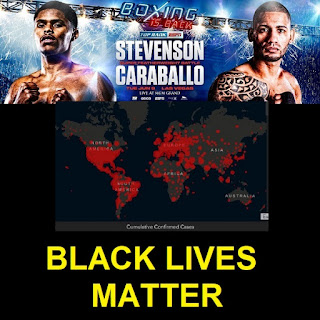 Much ado -- as much as anyone makes about boxing these days anyway -- is being made about the return of live televised boxing this Tuesday, June 9, on ESPN in the U.S. It will take place in Las Vegas at the MGM Grand Conference Center Grand Ballroom, a room much smaller than the MGM Grand Garden Arena where major fights are held.

The significance of this fight card is not that it is so spectacular, but that it is happening at all. This will be the first step in resuming major professional fights since most sports were shut down in early March because of the coronavirus pandemic.

The card is purposely a modest one, designed to dip boxing's toes back in the water and iron out any kinks as bigger shows are planned for the future. Promoter Bob Arum of Top Rank said on the fight's prefight media conference call and in numerous interviews that no title fights were planned for it so as to avoid complications of involving the sanctioning bodies, including presumably having their officials at the fight.

There has been much discussion about the safety protocols to prevent spread of the coronavirus, especially since no vaccine exists and none is expected to be available for some time. These protocols were devised in cooperation with the Nevada State Athletic Commission.

On the June 9 show, there will be no fans or media allowed. The fighters were tested for the virus when they arrived in Las Vegas and then quarantined in their hotel rooms until the results came back. Already one fighter, 2016 Olympian and unbeaten super featherweight Mikaela Mayer, tested positive. Her fight against Helen Joseph, billed as the show's co-feature, had to be cancelled. There are no other reports of positive coronavirus tests, but what these tests of participants and crew show after the event is over will be instructive in assessing how effective these safety measures were.

The main event features a fighter Top Rank is pushing hard, 2016 Olympic silver medalist and undefeated WBO featherweight champ Shakur Stevenson. His fight, at super featherweight, will see him face the relatively unknown Felix Caraballo, who has never before fought outside Puerto Rico. Stevenson said on the prefight media conference call that he might remain at super featherweight after this fight. While this is certainly a showcase fight which is expected to be one-sided, few are complaining since this first effort back on TV is partially an experiment in getting all these safety procedures right while producing something people will want to watch.

And therein lies a problem and challenge with this show which few are discussing. It takes place while the global coronavirus pandemic is still going on. And it takes place after about two weeks of massive demonstrations in every corner of the U.S. and in dozens of countries against the police murder of George Floyd, systematic racism and white supremacy, and continuing police brutality and killings.

Even though there are few live sports on TV, who under these conditions will want to resume watching the hurt business while so much of the world is hurting?

According to the Johns Hopkins University Coronavirus Resource Center, as of Monday morning, June 8, there are 7,049,649 confirmed Covid-19 cases in the world and 409,816 deaths. In the U.S., there are 1,946,144 confirmed cases and 116,929 deaths, the most of any country in the world. The total figures are likely much higher, since many cases and deaths from the virus have not been reported as such.

You likely know someone who has had this terrible disease, or died, or even had it yourself. Much of the world remains in mourning.

Since the murder of George Floyd by Minneapolis police on May 25, which was captured on a gruesome video, a mixture of outrage, grief, disbelief, and pent-up anger at the four centuries of white supremacy and violence against Black people has burst forth in an almost unprecedented and unending wave of demonstrations. As you are reading this, there are still more planned.

The slogan Black Lives Matter has now become mainstream. All over America, discussion and debate are occurring about slashing police budgets, completely reforming police practices, and punishing and firing the many law-breaking cops and their superiors who have attacked the public and acted like they are paid mercenaries. Trump threatened to unleash the military on American protesters, although this great uprising has forced him to retreat on that fascistic threat. It is no exaggeration to note that the very existence of American democracy appears to be at stake in this crisis.

With these twin crises involving death and violence, the coronavirus pandemic and the battles over policing and racism in America, how will the public receive the return of the violent sport of boxing?

The culture in these crises is quite different from what it was immediately after 9/11. Then most of the world was fighting angry at a cowardly shadowy enemy of fanatical and lunatic mass murdering terrorists. The atmosphere at the Bernard Hopkins-Felix "Tito" Trinidad fight at Madison Square Garden a few weeks after 9/11 was one of defiance. Here we can be angry at the politicians, corrupt and incompetent, who allowed this virus and police brutality to spread. But even this odious lot did not actually cause the virus to exist, as much as they failed to halt its spread, and not all of them were the rabid defenders of police violence and racism.

Right now there is a prevailing culture of peace, especially after all the deaths caused by these twin crises. The anti-racist demonstrations, while including a small minority of riotous provocateurs, have chiefly emphasized reconciliation.

How, then, in this culture of peace, sadness, fear, despair, isolation, uncertainty, and ill health, can we expect sports like boxing quickly to regain their audiences once they begin to be shown again on TV and streamed? The issue is not fights with no audience, which will undoubtedly change the tone of the events, because other, non-combat sports like baseball and soccer/football are also returning with no fans. The issue is the fights themselves.

Sure, the hardcore fight fans will be happy to get their sport back. But will that be enough to sustain the sport financially? And how will this worldwide economic crisis, which will not end quickly, affect the spending habits of the more casual and cash-strapped fans?

There are no easy or ready-made answers. But do not expect things to be anywhere near-identical as they were before these twin crises, as sports resume, however gradually.