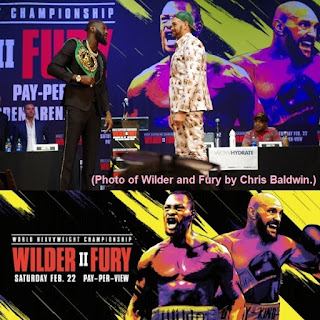 On this edition of No Holds Barred, host Eddie Goldman once again spoke with our correspondent Chris Baldwin.

She was at this past Monday's press conference in Los Angeles for the rematch between WBC heavyweight champion Deontay Wilder (42-0-1, 41 KOs) and Tyson Fury (29-0-1, 20 KOs). Their first fight, in Dec. 2018, ended in a controversial split draw, with most observers saying that Fury deserved the win. The rematch is scheduled to take place Feb. 22, 2020, at the MGM Grand Garden Arena in Las Vegas. In the U.S., it will be shown on a pay-per-view being jointly put on by FOX Sports and ESPN.

We spoke with Chris Baldwin by phone Friday.

"This was a really interesting presser. It was way smaller than the last presser, where they actually had a little fight on stage," she said, referring to the press conferences on the media tour for their first fight.

"Fury walked out on the stage as his name was called. No one clapped. That was one of the first things I noticed, and he seemed a bit taken aback by that, because he got no love. But then again, like I said, it was a small, media-only event. There were no fans present like the last time," she continued.

"And then when Wilder walked out, he had the WBC strap across his shoulders, and he did get a little bit of a round of applause. And then they faced off, and that's when the smack-talking began."

We discussed what we learned from this press conference, why this is an important fight for all boxing as well as the heavyweight division, how each fighter might win or lose this fight, the WWE-style bombast from Fury who recently performed in WWE, the poor media analysis of this press conference and the fight itself, the dismal prospects for the pay-per-view, what might be next for other top heavyweights including Anthony Joshua and Andy Ruiz Jr., and much, much more.

(Photo of Deontay Wilder and Tyson Fury by Chris Baldwin.)