No Holds Barred: Caradh O'Donovan On Athlete Activism, Moving From Kickboxing To Karate, And The Olympics 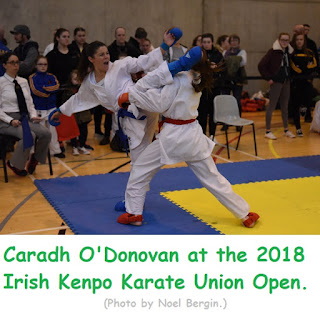 On this edition of No Holds Barred, host Eddie Goldman spoke with former kickboxer and current member of the Irish karate team Caradh O'Donovan.

She is also a member of the start-up group of the new international athlete-led movement Global Athlete.

We spoke with her by Skype Thursday.

Previously an amateur kickboxing world and European champion, Caradh O'Donovan recently made the transition to karate, and has become an Irish national karate champion. With karate being included on the program of the 2020 Tokyo Olympics, she hopes to represent Ireland there.

But her road to qualifying for the Olympics was almost derailed when a split and dispute between two rival governing groups prevented her and other athletes from competing in major karate events. It was then that she and these athletes contacted Global Athlete, who, along with the World Karate Federation, assisted them in finally being allowed to compete in these events.

"I didn't know anything about them until I got it touch," she said about Global Athlete. "When they asked me to come onboard the start-up group, I was delighted."

What she soon learned was that the kind of governance issues which were plaguing karate in Ireland were far from rare.

"I wouldn't even say it's so much an eye-opener, but I've had a lot of issues," she said. "I struggled with sport over the years. I've always kind of been labeled as a troublemaker, because I would say things that I didn't agree, speak up with things I didn't agree with."

Now as part of the Global Athlete start-up group, it is clear that there are "other issues and it's the same across every sport. So it's kind of nice to know you're not on your own."

But the scope of these problems is daunting.

"Obviously it's not a good thing that there's so many people with issues in sport and there's that kind of dark side." Now working with Global Athlete has given her more power to deal with these kinds of issues, and "I'm happy to be part of that."

We discussed the adjustments in technique and training she has had to make in transitioning from kickboxing to karate; the rules under which she has been competing; her best techniques in karate; dealing with injuries and illness; why this will likely be her only shot at qualifying for and competing in the Olympics; the Olympic qualifying events in karate in which she will be competing; her background in sports management and sports psychology; how ethics in sport are important to her; life as a full-time athlete; and much, much more.