Ruiz-Joshua 2 Predictions from the No Holds Barred All-Stars 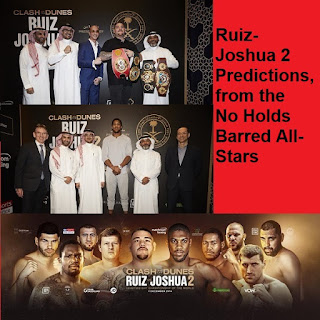 It looks like we will indeed have a heavyweight title fight this Saturday.

Both Andy Ruiz Jr. of the U.S. and Anthony Joshua of the U.K. have arrived in Saudi Arabia for their December 7 rematch and have started their fight week activities.

On June 1 of this year, Ruiz defeated Joshua by seventh-round TKO after Joshua had been dropped four times. Ruiz thus captured the WBA, IBF, and WBO heavyweight belts, and handed Joshua his first loss as a pro. Now the rematch is upon us, placed controversially in the Kingdom of Saudi Arabia.

While Ruiz's victory was considered a major upset at the time and Joshua is still a betting favorite for the rematch, this is a fight for which a rational argument can be made for either fighter to win, and either by knockout or decision. There are still many unanswered questions as to why Ruiz was able to pull off this upset, and of course whether or not he can defeat Joshua again.

To preview this fight, I've asked several people with whom I regularly communicate about the combat sports -- the No Holds Barred All-Stars -- to make their predictions for this fight.

As the old line goes, it is difficult to make predictions, especially about the future. But we shall try. 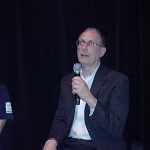 "I'm usually happy to make predictions, but I'm stumped this time. Too many things are going on that are happening outside the view of all but a few. I am no longer as sure about how good Joshua was as I had been (I didn't listen to his detractors). I think Ruiz is pretty much exactly the fighter I thought he was (and I thought he was good, even before the first fight, but not in any way special). I still believe that what happened the first time around was that Joshua, certain he was on the verge of scoring a kayo, didn't recognize that he was being hit with good shots even after one of them essentially knocked him out. He fought the rest of the fight unconscious. So maybe what happened was an anomaly. Maybe Joshua doesn't have a good chin. Maybe Ruiz has his number. Maybe things are going business-wise that will temper what happens in the fight. Maybe Ruiz likes being rich too much, and will come in under-prepared. Maybe Joshua's refusal to get a technically sound trainer will cost him again. Or maybe he just knocks Ruiz out and things revert to normal. That's too many maybes for me. No prediction."

"If Andy doesn't knock Joshua clean out then he is coming back to Cali with a fat paycheck and zero belts. But I don't see Joshua losing this fight."

"I really like Andy as a competitor. I wish his management never let him take a fight in Saudi Arabia. Ho could write his own ticket here, I don't understand it. They want him to drop that belt. I hope he gets all the money promised to him."

"The recent weight loss of Ruiz is suggestive of someone who is in the zone mentally. I'm not sure if Joshua has rekindled the fire he once had, although it is impossible to tell. I believe Ruiz wins this fight via eighth round TKO."

"While there remain numerous unanswered questions about their first fight, with perhaps the answers being unknowable for most of us at this time, there is one thing that seems certain: The Ruiz-Joshua rematch will take place in the Kingdom of Saudi Arabia with makeshift regulation and governance. Yes, apparently neutral and experienced officials have been chosen for it and the drug-testing is being done by VADA, the Voluntary Anti-Doping Association, which is the world's best such body. But funny things happen all the time in boxing in places with established commissions and regulatory bodies, almost always to the benefit of the house fighter. On this show, the house fighter is Anthony Joshua. So I expect Joshua to regain his belts one way or another, either deservedly so or not."