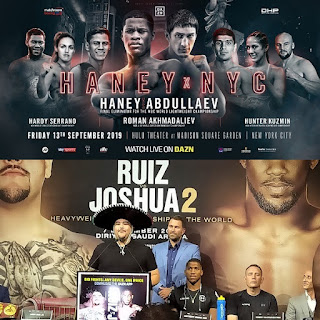 On September 13 at the Hulu Theater in Madison Square Garden, Devin Haney (22-0, 14 KOs) will fight Zaur Abdullaev (11-0, 7 KOs) for what is now being billed as the WBC interim lightweight title. The 20-year-old Haney is regarded by many as one of the rising stars of boxing. For the 25-year-old Abdullaev, this will be his first fight outside of his home country of Russia. This is the main event of a card which will be shown live on DAZN in the U.S. and on Sky Sports in the U.K.

We spoke with Devin Haney on a media conference call last month about what to expect in this fight.

On September 5, the Andy Ruiz Jr.-Anthony Joshua 2 media tour landed in New York. This fight will take place December 7 in Diriyah, Saudi Arabia. It is a rematch of their June 1 fight in New York, where Joshua was stopped in seven rounds and lost his heavyweight belts to Ruiz.

As usual, little substance came out of the questions and interviews conducted at this press conference by the largely obsequious and obedient shills and triflers who make up boxing's dwindling media corps. That is not the case here.

At this press conference, we spoke with Joe Markowski, DAZN EVP North America, about the continuing negotiations for worldwide rights to show the Ruiz-Joshua 2 fight on December 7 from Saudi Arabia. As of this recording, DAZN will show it in the U.S. and is trying to get rights for all countries where DAZN operates. He also said the host broadcaster will not be Sky Sports, which is showing this as a pay-per-view in the U.K. The host broadcaster will be "a group attached to the Saudi Arabian government," he said. And we discussed future plans for DAZN, including an announcement expected shortly about the next fight for Saul "Canelo" Alvarez.

Next we spoke with Matchroom Boxing promoter Eddie Hearn. Little has been explained about the governance for this fight. Hearn said the lead body is the heretofore unknown Saudi Arabia boxing commission. Asked who is on this body, all he would say is, "Who is on it? A group of representatives that have been on it since its inception." Hearn said that this body started operating with the World Boxing Super Series card in September 2018 in Jeddah, Saudi Arabia, headlined by the Callum Smith-George Groves super middleweight final. But before this statement, there has been no known record of this body's existence on the record keeping site BoxRec. Hearn did add that representatives from the British Boxing Board of Control and from an American commission selected by the Ruiz camp would also be overseeing this fight. And we also discussed issues like the rules and officials for the fight.

Manny Robles, who is Andy Ruiz's trainer, is preparing his fighter to try to defend his newly won heavyweight belts. We discussed what happened in the first fight, what adjustments both Ruiz and Joshua are likely to make in the rematch, how he sees this fight going, and more.

It was in Africa that the martial arts and combat sports originated. And it was Africa that gave these to the world. The tomb paintings of wrestlers and martial artists in the Ancient Egyptian cemetery site now called Beni Hasan from over 4000 years ago are perhaps the most famous surviving illustrations of this history.

For as many millennia as human civilization has existed and developed, African martial arts and combat sports have continued to be taught, practiced, and handed down from generation to generation.

That, however, may be beginning to change.

Earlier this year in April, the first event of the African Warriors Fighting Championship (http://africanwarriorsfc.com) was held in the village of Eha Amufu in Enugu state in southeastern Nigeria. This village is known as one of the centers of Nigerian traditional wrestling, which was one of the two sports contested in this debut event. The other sport was Dambe, a traditional form of boxing popular in West Africa where the back hand is wrapped and used for striking while the front hand is used for defense, along with kicks and sweeps being allowed.
(https://www.voice-online.co.uk/article/taking-african-combat-sports-village-world)

While the name African Warriors Fighting Championship may sound similar to those of various mixed martial arts promotions, its plans, according to founder and CEO Maxwell Kalu, who is of Nigerian heritage and based in London, are quite unique.

In an interview on No Holds Barred, he stated, "There's such a rich culture of them, and rather than be the sort of poor African cousin of the UFC, of ONE, or of Cage Warriors, or whatever, I'd thought, I'd love to do something totally, totally different that really speaks to the uniqueness of Africa, starting with Nigeria, and really plays to our strengths."
(https://www.podomatic.com/podcasts/nhbnews/episodes/2019-08-30T01_53_40-07_00)

After this debut event in April, their next event, called "The Battle for Lagos", is scheduled for September 14 at the Jalisco Stadium, Oshodi, Lagos. A third, larger event is also planned for December in Lagos. If all goes well, future plans include expanding throughout Africa and other parts of the world, and getting TV and streaming distribution.

One example of this is the renewed interest in the fighting system known as 52 Blocks. This uses boxing and other techniques in large part for defense in street fights rather than for sport in the ring. 52 Blocks is a loose and ever-changing system that has been handed down for countless generations, primarily among African-Americans, and is taught and practiced differently in different locales and by different trainers.

What each variation of 52 Blocks has in common, however, is its African origin.

As Harlem-based martial artist and instructor Mahaliel Bethea AKA Professor Mo said in a recent cover story in Black Belt magazine, "Most masters of 52 Blocks will tell you that it's a martial art from Africa."
(https://blackbeltmag.com/arts/western-european-arts/professor-mo-everything-to-know-about-52-blocks) 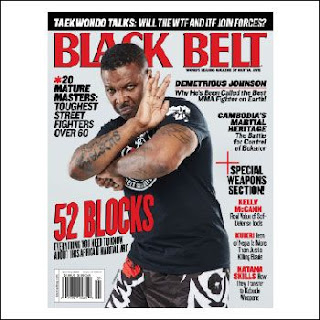 Besides Professor Mo, who is returning home this week from Ghana's "Year of Return" events, many others are training people in 52 Blocks.

On September 8 in Atlanta, Georgia, veteran martial artists Balogun Ojetade of the African Martial Arts Institute and 52 Blocks trainer Wise Morrow will be holding "A Day With The Masters" focusing on 52 Blocks and African martial arts.
(https://www.facebook.com/events/362721771095731) 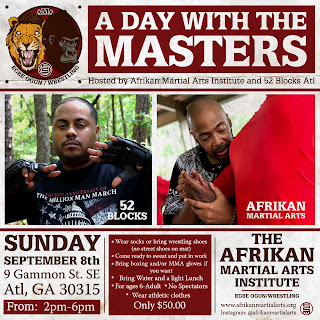 Another trainer, Lyte Burly, has also conducted numerous 52 Blocks seminars across the U.S., and holds regular training sessions in Harlem's Marcus Garvey Park and elsewhere. He is also a boxing trainer. On YouTube, he regularly posts short videos demonstrating these techniques.
(https://www.youtube.com/user/52blocksinfo/featured)

Besides many other practitioners of 52 Blocks, many people are studying and exploring the history of African martial arts. On the weekend of May 17 of this year in Austin, Texas, the Council of HAMAA, the Historical African Martial Arts Association, held its first gathering "to celebrate Historical African Martial Arts". According to their web site, the "HAMA community gathered in solidarity to feast, study, and compete in the first ever HAMAA Tournament of Champions."
(https://hamaassociation.wordpress.com/media/hamaa-the-gathering-2019) 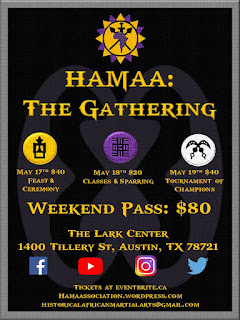 While a new generation is moving forward with the African martial arts and combat sports, some veteran African-American martial artists of earlier generations are still active. Founded in that turbulent year of 1969, the Black Karate Federation recently commemorated its 50th anniversary, with some members continuing to train younger people.
(https://www.facebook.com/Brotherhoodofthebkf) 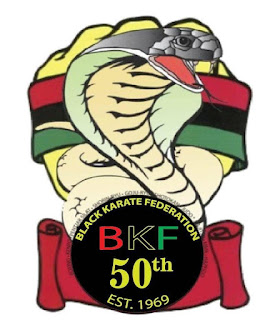 All these developments are occurring while there is a vacuum forming in the martial arts and combat sports worlds. For example, the largest mixed martial arts promotion in the world, the Ultimate Fighting Championship, has become politicized as it uses white nationalism and racism as marketing tools to secure its primarily white, cultish fan base. Instead of penalizing athletes who have publicly made all sorts of racist, white supremacist, misogynist, anti-working class, and anti-LGBTQ remarks and statements, as almost all legitimate sports organizations do, UFC's management has encouraged and rewarded people who have done this, like Chael Sonnen, Conor McGregor, and Colby Covington.
("The UFC Has A Race Problem")

By importing the "good guy vs. bad guy" schtick of the fake wrestling groups, and even going as far as making a propaganda video praising Donald Trump, UFC is alienating many people who have been part of the martial arts and combat sports worlds.

In contrast, both in Africa and among African-Americans, learning the martial arts and combat sports has been seen as part of the overall freedom struggles.

For example, Malcolm X famously said on March 29, 1964, at New York's Audubon Ballroom, "If you're interested in freedom, you need some judo, you need some karate, you need all the things that will help you fight for freedom."
(http://www.vlib.us/amdocs/texts/malcolmx0364.html and https://www.youtube.com/watch?v=blvoRFIPwM8) 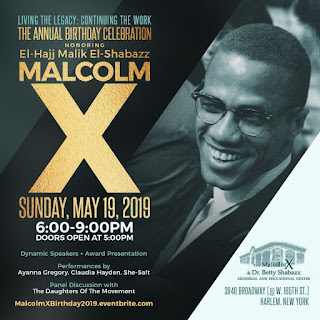 And with these freedom struggles reviving in the 21st century, so is interest in the African martial arts and combat sports.

The door, thus, is open fairly wide for the African martial arts and combat sports to step through and explode in popularity. But even with all the compelling stories briefly outlined above, one would have to hunt through a series of Facebook, YouTube, WordPress, and similar pages just to find and process them.

So is this the year in which African martial arts and combat sports take their rightful, prominent place on the world stage? At minimum, they have already taken major steps in that direction. It is up to all of those who study, support, teach, and practice the African martial arts and combat sports to work to continue and assist this ongoing process.

No More Patreon For Me 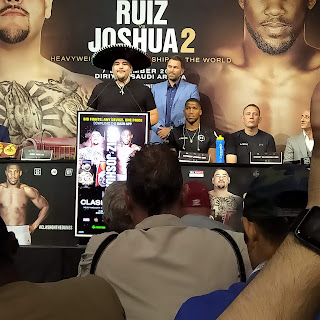 While I was at the Ruiz-Joshua 2 press conference earlier today, I started getting messages from people who tried to read my latest article on Patreon called "Is This The Year African Martial Arts And Combat Sports Explode Onto The World Stage?" Several people wrote me that Patreon was charging money to read what is a free article. I still don't know what happened, whether the problem was with their app or maybe I messed up the settings, but it is all supposed to be free on my page there. In any case, I will repost the article here on my blog. I will also stop using Patreon. It is a waste of time. Thanks, Eddie 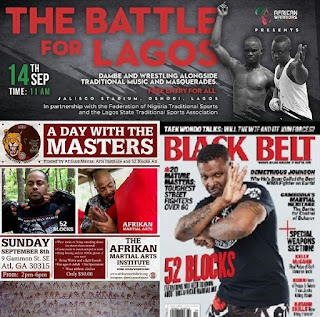