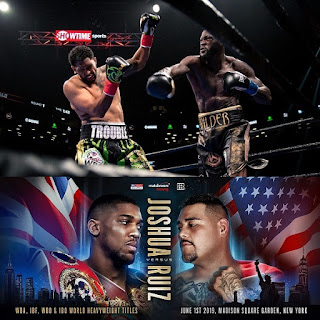 On this edition of No Holds Barred, host Eddie Goldman busts up the many myths being peddled in the media about how Deontay Wilder's knockout performance against the hapless Dominic Breazeale this past Saturday, May 18, made him into some type of major star. Also discussed is the future of the heavyweight division, the upcoming fight on June 1 of unified heavyweight champion Anthony Joshua against Andy Ruiz Jr., and much more.

Wilder vs. Breazeale: No One Died But At Least It Was Quick 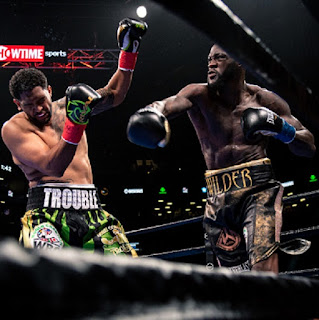 You can get a lot done in about two minutes and 17 seconds. The 1956 cover version of rock 'n' roll classic "Hound Dog" by Elvis Presley (originally recorded in 1952 by Big Mama Thornton) was just two minutes and 13 seconds. The 1963 original recording of Lesley Gore's "It's My Party" is listed at two minutes and 19 seconds. In those hallowed days, the most popular form of music distribution was by the 45 RPM vinyl record, which usually cost well under a buck but could only fit a bit more than two minutes of sound on each side of the record. The top records were packaged in colorful sleeves with memorable photos, memorabilia which is little known to almost anyone too young actually to have dialed a phone or played a stack of these precious 45's on their record players.

Two minutes and 17 seconds was also the time it took for WBC heavyweight champ Deontay Wilder to knock out Dominic Breazeale in the first round of their title fight Saturday, May 18. This fight took place at the Barclays Center in Brooklyn, in front of another of Wilder's non-sellout crowds which, according to The Guardian, was "charitably announced" at totaling 13,181.

Despite the wows of those who somehow expected a competitive fight, and the Twitter storm that landed Wilder as the top trending topic in the U.S., U.K., and worldwide for hours after the fight, it is wishful thinking to expect that this fight will culturally resonate with anywhere near the impact and longevity of these rock 'n' roll anthems from our dearly departed Mr. Presley and Mss. Thornton and Gore.

Breazeale not only went into to this fight as a major underdog, but had been on the canvas in three of his previous five fights. In January 2016, 40-something Amir Mansour, who had spent almost a decade in prison, and who was winning his fight before retiring after the fifth round claiming an injury, dropped Breazeale in the third round. Breazeale's next fight, in June 2016, was against Anthony Joshua in the first defense of his IBF belt. Joshua beat him up before the fight was stopped in the seventh round. Next, in February 2017, was little-known Izuagbe Ugonoh, who dropped him and was also ahead on all three scorecards after four rounds before being stopped by Breazeale in the fifth round. Subsequent stoppage wins by Breazeale over Eric Molina and Carlos Negron hardly put him in a class with Sonny Liston, but did enough to dim the memories of his escapes from disaster long enough for the WBC to peddle him as their mandatory contender for Wilder.

After Wilder's split draw with Tyson Fury in December 2018 on Showtime pay-per-view -- a fight almost the entire universe had Fury winning -- and talks for a rematch collapsed after Fury got his own relatively safe, lucrative, and exclusive deal with ESPN, Wilder's team chose to fulfill this obligation of fighting that WBC mandatory. Hence we got Wilder vs. Breazeale.

Much has been made of Breazeale's background as a college football quarterback at the University of Northern Colorado. Before this fight he said this was his "Super Bowl". And in the fight itself he performed more like a quarterback plagued by poor protection from his offensive line, looking to take a knee or throw the ball away, rather than a boxer who can take things into his own hands with his two fists.

Breazeale's best moment of this abbreviated battle actually occurred when Wilder, wild as usual, backed him into a corner with a barrage of wide punches. Breazeale counter-punched his way out, with one blow apparently landing behind Wilder's head. Wilder backed away and momentarily turned to the referee to complain, but the referee was not halting the action. This was Breazeale's chance to take advantage of Wilder's mistake. Instead, he let Wilder move away and then tie him up. Breazeale also was not jabbing his way in, but rather ambling towards Wilder with the head movement and footwork of the Statue of Liberty, maybe in honor of this fight taking place in the Big Apple. He was a sitting duck for Wilder's well-known right-hand knockout punch, and when it came, not punching or protecting his head, down he went, and it was over.

Showtime announcer Mauro Ranallo then exclaimed, "Wilder hit Breazeale so hard, they are feeling it in Brazil!" But he didn't add that Breazeale left an opening for this shot almost the size of Brazil.

Now it was time for the politics and trickeration to resurface. Wilder, who had threatened literally to kill Breazeale in the ring, now said he loved him. In the in-ring, post-fight interview, Showtime's Jim Gray tried to goad Wilder into calling out the other two top-rated heavyweights, Joshua and Fury, but suddenly the loud "Bomb Squad"-er demurred.

Luis "King Kong" Ortiz, whom Wilder defeated last year, was brought into the ring, perhaps for a staredown between these two Al Haymon-affiliated fighters, but that fizzled.

No mention was ever made of Dillian Whyte, for some time now the WBC number one-ranked contender (somehow different than being the mandatory for the World Bizarro Council), as a potential next opponent.

Wilder's co-manager Shelly Finkel told the post-fight press conference that he will meet next week with John Skipper of DAZN, to which Joshua is affiliated, and is still talking to Fury's co-promoter Top Rank. All chanted in chorus that these big fights involving Wilder, Joshua, and Fury are guaranteed to happen sometime soon. And the check, of course, is in the mail, I'll respect you in the morning, and I won't come in your mouth.

Joshua, of course, next fights late replacement but capable opponent Andy Ruiz Jr., on June 1 at Madison Square Garden. Fury faces little-known Tom Schwarz June 15 at the MGM Grand in Las Vegas. Yet there is another reason for all these fabricated obstructions to any two of these top three heavyweights getting in the ring with each other next.

The most complete, toughest, and all-around skilled fighter of these three is Joshua. Wilder may have better one-punch power than Joshua, but Joshua will not stand still like the Breazeales of the world, and has knockout power worlds above Fury's, while being able to move adeptly enough to avoid the clumsy Wilder's onslaughts. This is why virtually every independent observer of boxing ranks Joshua at the top of the division, followed by Fury and then Wilder.

Joshua vs. Wilder will bring in a lot of money and crown an undisputed heavyweight champion, and even possibly lead to a rematch, but the likeliest outcome, despite Wilder's starching of Breazeale, is for Wilder, already 33 years old, to lose his belt, what little drawing power he has, and perhaps his status as a main event fighter. So taking the risk of fighting Joshua would mean his team is ready to cash out on him. Before fighting them, they will try to milk the fans with a rematch with the aging Ortiz and then the blubbery Adam Kownacki, who almost lost a decision last year to the same Charles Martin who Joshua destroyed in two rounds. So it is not simply the exclusive deals Joshua, Fury, and Wilder have with competing networks which are holding up these showdowns.

Wilder's fanbois and girls are deliriously serenading social media with songs of conquest for their champion of Alabama. But he really lost to Fury, fought an inept and mentally beaten man in Breazeale, and seems on course for more hand-picked offerings for at least a year or more.

But Wilder's highlight-reel knockout did capture some major attention. CBS Sports (CBS is Showtime's parent company) posted a 30-second video of the knockout on Twitter, which as of Sunday morning has over seven million views. ESPN, a rival of CBS/Showtime, gave the fight and knockout extensive coverage. Also on Sunday morning, Tyson Fury posted a video on Instagram congratulating Wilder and saying he would knock out anyone, including Joshua, except of course him. But he said nothing about a rematch with Wilder.

Joshua's promoter Eddie Hearn of Matchroom Boxing told Sky Sports, which showed this fight in the U.K., that this "was an impressive win for Deontay." Hearn also said, "The fight with AJ and Wilder is the biggest fight in the sport and all being well in two weeks' time it must happen next - no excuses, this is the fight that will change the sport globally." And no doubt Wilder's visual and viral knockout of Breazeale will add pressure on Joshua to produce a similarly notable finish of Ruiz in two weeks.

But other than Hearn, no one pulling the wires behind the scenes is publicly demanding a Joshua-Wilder unification fight be next.

So sit we must through Joshua vs. Ruiz, Fury vs. Schwarz, and perhaps Godzilla vs. Pokemon. Thus, until Wilder steps into the ring with Joshua, I hereby reply, without swiveling my hips: