No Holds Barred: Angel Amoroso on Untold Stories from the Early Days of MMA - Part 1 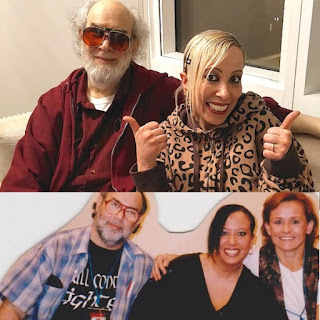 On this edition of No Holds Barred, host Eddie Goldman spoke with former MMA fighter and pro wrestler Angel Amoroso.

We spoke with her Sunday in New York. This is the first of a two-part interview.

Angel Amoroso is one of first people I interviewed in person, sometime in the early 1990s at a time neither of us can recall. She was then performing in ECW pro wrestling, but it was not long after that both of us exited that scene. She would then continue as a mixed martial arts fighter, as well as running her own business in what is sometimes known as apartment wrestling.

In part one of this interview, we discussed moving over from pro wrestling to MMA, changes in MMA over the years, the important roles played by John Perretti and Phyllis Lee in MMA, Angel's crazy experience in her 1998 MMA fight with Yumiko Hotta in L-1 in Japan, the issue of trans fighters in MMA, the devolution of today's MMA into "junior boxing", the use of MMA and martial arts techniques as self-defense, and much more, with much more to come in part two.