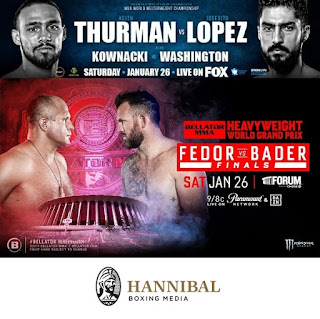 On this edition of No Holds Barred, host Eddie Goldman discussed the upcoming fights with WBA welterweight champion Keith Thurman, and Bellator Heavyweight Grand Prix finalists Ryan Bader and Fedor Emelianenko. Also discussed is the latest development in the Russian state-sponsored doping scandal and how the World Anti-Doping Agency (WADA) is handling it.

Keith Thurman (28-0, 22 KOs) returns to action Saturday, January 26, after a 22-month layoff due to injuries, against journeyman Josesito Lopez (36-7, 19 KOs), on a PBC card at the Barclays Center in Brooklyn. It will be televised live in the U.S. on Fox and in Spanish on Fox Deportes, and in the U.K. on ITV4.

We spoke with Keith Thurman on Tuesday's media conference call.

Also on Saturday, January 26, Bellator MMA has a card at The Forum in Inglewood, California, which will be shown in the U.S. live on TV on the Paramount Network and streamed on DAZN.

Last not far from least, we got a question in on the WADA media conference call announcing the next steps in dealing with the Russian state-sponsored doping program.

My first piece for Hannibal Boxing is up:
The Long Con: Manny Pacquiao and Adrien Broner.