No Holds Barred: The Legacy of the World Sumo Challenge 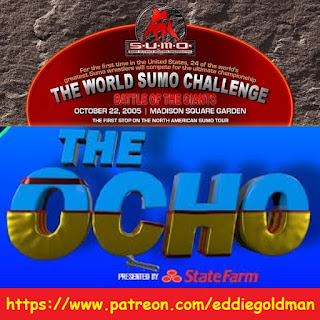 This event originally took place October 22, 2005, at Madison Square Garden, and was shown on tape delay on ESPN2 that December. The original No Holds Barred show on this event was posted on December 27, 2005.

This new edition of No Holds Barred adds at the beginning of the show commentary on why this venture failed and the still-unmet need for the formation of a real professional wrestling circuit of some kind.

The original World Sumo Challenge event will be replayed in August by ESPN as part of their "The Ocho" series, on the ESPN app and also via your service provider's On Demand feature, we are told by an ESPN representative.

A highlight video of the World Sumo Challenge can be seen at https://www.youtube.com/watch?v=kmv4xm8d72w.

Here is the original and quite optimistic description from the December 2005 No Holds Barred show on the World Sumo Challenge:

Here are the people with whom we spoke:

Former yokozuna Musashimaru, who served as a color commentator and analyst on the ESPN2 telecast.

Veteran boxing trainer Tommy Gallagher, who was also working with this event.

Noah Goldman, president and CEO of Big Boy Productions, which produced and promoted the event.

Yoshisada Yonezuka, a vice president of the International Sumo Federation and longtime judo coach, who acted as a sumo technical advisor for the event. [Note: Sadly he passed away in 2014.]

We also spoke with two of the participants, sumo wrestlers Ronny Allman of Norway and Sydney Carty of the Netherlands.

In addition, at the Mayhem On Mulberry 5 muay Thai event held the night before the live sumo show, we caught up with two judo legends, Teimoc Jonston-Ono and Mike Swain. We discussed the sumo event, with which they both were attending, as well as judo, mixed martial arts, muay Thai, and the combat sports in general.

Also at the muay Thai event, we caught up with two of the fighters that night, Brian Robertson, who won a decision over Marcus Antebi, and Willow Chanthavong, who lost a decision to Liz Linstrom.

As we mentioned during this special preview show, the World Sumo Challenge was highly organized, got tremendous mainstream media attention, and was very well received by the fans at Madison Square Garden. The telecast had excellent production values and the tournament format was well explained both at the live event and on TV. Plus, sumo is fairly easy for casual fans to understand, and the action on the mat was usually non-stop and had the mainly American crowd cheering throughout the tournament.

The major and perhaps only shortcoming was its inconsistency in educating the fans as to who the athletes were. For example, Torsten Scheibler, the 438.5-pound wrestler from Germany, had recently won the gold medal at the world championships in Japan. Yet he was upset in the first round by Sydney Carty, a mere 328.5 pounds. Yet this was only noted briefly after the match by Musashimaru, with Scheibler's credentials going almost unnoticed, and the huge sports story of this first-round upset not being emphasized.

Also, the event's first champion was Mitshuhiko Fukao, a 5'10", 411.5-pound wrestler from Japan. Little was known about Fukao before the event and less reported about him afterwards. There was no post-match interview with Fukao, who had become a crowd favorite, or a post-event press conference. Even though an interview with Fukao would have had to have been conducted in Japanese, there were numerous people who could have done the translating right there. Thus, Fukao is their first champion and will defend his title without much more information even to this date being provided about him.

Nonetheless, the World Sumo Challenge has to be considered overall a major success. A new professional combat sport is being born, and that is good news. Others in the combat sports world can learn a lot from how this event was organized and conducted. 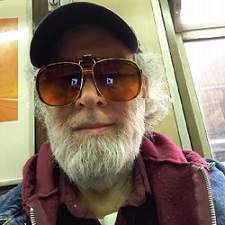