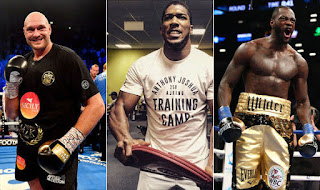 NEW YORK, April 1 -- At a hastily organized press conference at Yankee Stadium, the trio of top, undefeated heavyweight champion boxers, Anthony Joshua, Tyson Fury, and Deontay Wilder, announced they had signed to fight in a round-robin tournament beginning next year to crown an undisputed heavyweight champion of the world. There will be at least three fights involving them, and perhaps more down the line.

The fights will take place in major stadiums around the world, including Yankee Stadium in New York, Dodger Stadium in Los Angeles, and Wembley Stadium in London.

As for TV, all these fights will be shown for free on NBC in the U.S. and BBC in the U.K., plus on many other networks around the world, as well as being streamed.

"We got rid of all these promoters and networks who where holding back the biggest fights in the world," said Joshua, who holds the IBF, WBA, and WBO belts. "We just do not need them anymore, and negotiated this ourselves through our own managers and lawyers," he added.

"We don't need all these big dossers," said Fury, regarded by many as the lineal heavyweight champion. "They are all a bunch of bloody parasites. The Gypsy King will show the whole world who is really the best!"

"I've said all along that there has to be one face, one champion, one man in the heavyweight division. And now I can show all of you that it is me, and only me," said Wilder, who holds the WBC title. "Bomb squad!"

A worldwide media tour, in which all media will be guaranteed to get one-on-one interviews with all three fighters, will be announced shortly.

Said journalist Eddie Goldman, who played a key role on Twitter in urging the fighters to set up this tournament, "This may just be an April Fool's gag, but any sport with proper governance would already have done exactly what is proposed here."