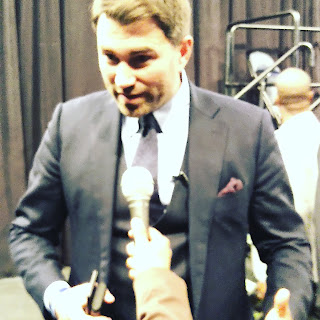 The Mexican food served to the media at the Feb. 27 press conference at Manhattan's Hard Rock Cafe for the "Canelo" Alvarez-Danny Jacobs fight was of such a top quality that it didn't even upset my fragile stomach, which sometimes rebels against anything other than water and green tea. For most of the presser, however, that was the high point for me.

After a series of mostly cliched speeches, special access given to the fighters mainly to those who dutifully repeat publicists' taking points, and a nervous building staff who wanted us all out so they could set up the joint for the paying tourists, I did score one meaningful interview. I had wanted to ask Canelo's promoter, Oscar De La Hoya, if he is actually running for president (of the United States, not Golden Boy Promotions). I always like getting quotes from his partner at Golden Boy, Bernard "The Executioner/Alien" Hopkins, a former undisputed middleweight world champion who knows a thing or million about the division in which this unification fight is being be held. I did briefly speak with the Tecate girl extraordinaire Janira Kremets, who was rushing out and deferred doing an interview but did take a selfie with me that somehow did not come out on my new super-duper smartphone (she wrote me that we will get one next time). It was only at the very end of this event, after almost everyone had left, that I cornered the one person who seemingly never tires of doing interviews, Matchroom Boxing's Eddie Hearn, who promotes Jacobs.

I learned a long time ago that if you plan to ask some tough and maybe irritating questions of an interviewee whom you respect, it is best to start with something light, both to break the ice and establish a rapport. When Hearn was introduced during the formal proceedings, he had been booed, mainly by the fans, mostly pro-Canelo, who had been allowed to witness this gathering in the balcony. That gave me my lead-in, as in the short time I knew I had I wanted to dive right into the ongoing and ugly heavyweight stalemate involving non-fights between any two of the trio of Anthony Joshua, Deontay Wilder, and Tyson Fury.

"Real quick, we gotta go, we gotta get out of here," he said, for an interview that flew by in about five minutes.

"What's wing tips?" He asked. I told him his shoes, and he actually apologized, saying, "Oh right, OK, sorry about that."

Now it was on to the serious stuff.

I noted, as many already know, that Canelo had two close fights with Gennady Golovkin that went to decisions. Their first fight was a draw, in which most people seemed to think that Golovkin deserved to win. Their rematch went to Canelo, and while a closer fight, opinions were divided all over the map. And when Golovkin fought Jacobs in another very close fight, Golovkin got the nod while many thought that Jacobs deserved to win.

Thus I asked, since these three are all excellent fighters and there seems a reasonable chance that Canelo-Jacobs also goes to a decision, if it is close but Jacobs deserves to win, can he get the decision in Las Vegas on Cinco De Mayo weekend, over the fan favorite there Canelo?

He replied: "I think we're up against it and I think we know that. I think it's our quest and priority to make sure that we make people aware of that, and we put pressure on the (Nevada) commission to accept a suitable panel. I also think sometimes it can work against you, i.e. Canelo, in that everybody's talking about it. Everyone's talking about the Triple G fight, that he got those decisions, and maybe this one is a close one and he doesn't get the decision. But we realize we are effectively going into enemy territory, and that's part of Danny Jacobs's game plan, to make sure that he wins the fight convincingly. You what, Eddie? Sometimes you can win the fight and the world knows you won the fight, but you don't get the decision. But the world will know. So we will see."

And we shall. Now it was on to the heavyweights, in the time remaining before the crew picked us up and deposited us, or at least the few working media types left there, onto Broadway.

The political situation with the top three heavyweights is that they all are tied to rival networks with exclusive deals, or so it seems anyway. Joshua is with the DAZN streaming service in the US and Sky Sports Box Office pay-per-view in the UK. Tyson Fury just signed with ESPN in the US and is still with BT Sport and its pay-per-view arm in the UK. Deontay Wilder, an Al Haymon and PBC fighter, has been with Showtime, with his fight with Fury on Showtime pay-per-view, and PBC also on Fox. PBC also recently started a deal with ITV in the UK, although Wilder has been quoted as claiming that he is now a network free agent. With all these competing networks, how, I asked, can a fight involving Anthony Joshua, who is promoted by Eddie Hearn's Matchroom Boxing, be made in the US?

And then came a very revealing reply that some, especially paying DAZN subscribers, might not approve of:

"I'll stop you there, Eddie, because you confuse me. That shows you how confusing it is. The simple answer is, a fight with Wilder and Joshua, I believe, is now very easy to make because Wilder doesn't have an agreement with any broadcaster. I think the Fury fight with ESPN, one thing for sure, he will box on ESPN. That is the contract.

"Could we box on another platform? Yes we could. Do we want to box on DAZN? Absolutely, with Joshua. So anything's possible, but it's also very, very difficult. But I think right now the easiest fight to make is Joshua against Wilder."

DAZN has proudly advertised that the pay-per-view era has come and gone, so how, I wondered, could Joshua fight on US pay-per-view?

He replied, "Joshua is on a fight-by-fight deal with DAZN. Now, they also have a first-last matching option on it, which effectively has him locked under their control. They are not a restrictive company who would say, 'No, Joshua, you cannot fight Deontay Wilder. We are stopping you from doing that.' But at the same time, they want Joshua on DAZN. Deontay Wilder doesn't have a broadcaster, doesn't have a network. So I believe that's a fight that could be easy to make.

"Would Joshua fight Tyson Fury on ESPN pay-per-view? Not ideally. Could he? Yes. Let's see the money, ultimately, because I believe DAZN will pay more than both of those two. But it's very, very difficult, and we've seen disappointment for the fans because Tyson Fury has ducked the Wilder fight."

And what about the possibility of a TV-streaming share of the broadcast, like, even though I didn't mention it, DAZN does in some countries and does in the US with some Bellator MMA shows which are also on the Paramount Network. I did, as the pace of our discussion was rapidly increasing, mention the Mayweather-Pacquiao fight which was shared by Showtime and HBO, obviously not the best example.

"How can you do that when DAZN is 9.99 a month for subscribers, and Showtime want a hundred dollars for your money? So which platform do you think people are going to buy on?" he said with a laugh.

So I went to some of the possibilities I had originally intended to, mentioning regular Showtime or free over the air on Fox. That elicited a concise answer.

With so many options seeming to be unrealistic, or the money men unwilling to agree to, how likely is it that any of these are going to happen, I asked?

And is there any actual progress to making such a fight, which would be to unify all the major heavyweight belts and to crown -- drum roll and trumpets, please -- an undisputed heavyweight champion of the world?

He continued, "We're the only heavyweight in that top three right now who has a date confirmed, who has tickets on sale, who has a deal in place to be done. So we have to worry about our own business, and right now, June the first, Madison Square Garden, Anthony Joshua against Big Baby Miller."

Since we were in New York, New York, land of Shelly Finkel, will he be meeting with him while he is still in New York?

It was finally time to go, and I reiterated, perhaps in a futile effort, that I hope these fights get made.