My prefight piece on the Fury-Wilder fight has been posted on "The Sporting News".

Fury-Wilder And The Road To Undisputed Heavyweight Championship Of The World
http://www.sportingnews.com/us/boxing/news/fury-wilder-and-the-road-to-undisputed-heavyweight-championship-of-the-world/1t4jljurw0y0i1gnp04owmb9gf

No Holds Barred: Lavell Marshall On The Growth Of Shuai Jiao And His Upcoming Journey to China 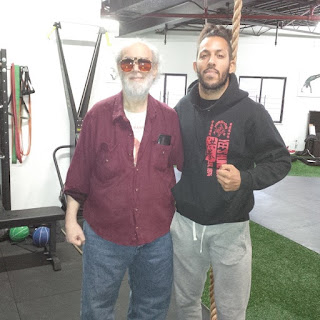 On this edition of No Holds Barred, host Eddie Goldman spoke Lavell Marshall.

While proficient in many types of martial arts, he mainly focuses as a trainer and competitor in Shuai Jiao, the Chinese traditional style of wrestling.

We spoke with him Sunday, right after a seminar he conducted in New York.

There are several different styles and rulesets of Shuai Jiao, although in general it is all standup wrestling with no groundwork or par terre. Although some styles include striking and joint locks, they are all done from the from standing position.

Though not well-known in the U.S., interest in Shuai Jiao is slowly starting to grow around the world.

"Shuai Jiao is something that in China, it's gaining a lot of popularity, in places like Mongolia and Europe, especially in Russia," he said. "But in the West in general, especially in the USA, it's still kind of low-key. It's unknown. It's kind of behind sambo when it comes to just recognition. But it's growing in popularity and it's something I think is going to blow up in the next ten years."

While Shuai Jiao is "my main style that I study and compete in," when he does compete in other competitions such as jiu-jitsu, he said he represents Shuai Jiao to show its effectiveness.

We discussed the differences between combat and sport Shuai Jiao; why he decided to focus on Shuai Jiao; some of its history and development in China; how schools there are now training students in Shuai Jiao; governance and organization of the sport, including the recent establishment of one governing body in China; the need to amp up the level of competition and attract more athletes; and how the small U.S. community is divided by "politics" and the need to work together.

In about two months, Lavell Marshall will be moving to China. His goals there are to train to become "one of the best there is in Shuai Jiao." That would also facilitate him helping him spread it widely in Europe and America. Getting Shuai Jiao out to the West is essential because he said that in China, many in the Shuai Jiao community don't care about showing it to the West.

We also discussed Shuai Jiao as self-defense, especially combat Shuai Jiao; how in the U.S., Shuai Jiao needs more money, more competitions, and may require changing the existing rulesets; how already in China, some competitions are allowing the wrestlers to go to the ground; the importance of getting more exposure for Shuai Jiao by competing in multi-style events like the World Nomad Games; and much more.

"Stay tuned for Shuai Jiao, because I promise you, great things are coming and it is worth it," he said.