No Holds Barred: Qin Yunquan on Self-Defense and Catch Wrestling in Singapore and Asia 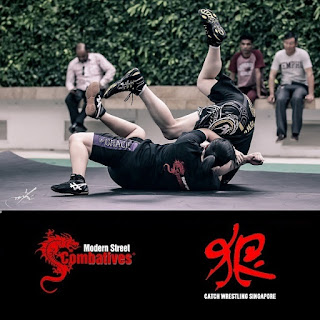 On this edition of No Holds Barred, host Eddie Goldman once again spoke with martial artist and catch wrestler Qin Yunquan, who is the CEO, co-founder, and chief instructor for women's and children's self-defense at the Kapap Academy Singapore.

We spoke with her by Skype Tuesday.

The activities of Qin Yunquan, particularly in the area of teaching self-defense, have been getting widespread coverage in the Asian mainstream media, which reaches an enormous number of people on that continent and beyond.

"It was a huge honor," she said, to be listed on the "Forbes" 30 Under 30 Asia list, in the social entrepreneurs category, which is for "leveraging business tools to save the region's problems". An event for these honorees was held in Hong Kong, which she attended.

"It was a great opportunity to share with these people about what I did in Singapore, the social impact we're trying to create, etc. And of course to hear from these inspiring people as well about their own achievements and their work."

She has also been "featured in quite a few mainstream media, being on TV, in magazines, being part of what are called the Change Makers Campaign by CLEO Magazine.

"Being on these channels has been a great opportunity for me to continue to share the message of empowerment and self-defense with as many people as possible. Because the whole idea is to continue to educating people the importance of self-defense, and why EVERYBODY can do self-defense."

At the same time, she is training people in catch wrestling and grappling.

"More people are hearing of catch wrestling than ever before," she said.

We discussed plans for seminars and competitions in catch wrestling this fall, the need for catch wrestling to have standardized rules and proper governance, her plans to train women in India in self-defense, why her work is more than a job and really a "calling", and much, much more.