The Curious Comeback of Tyson Fury 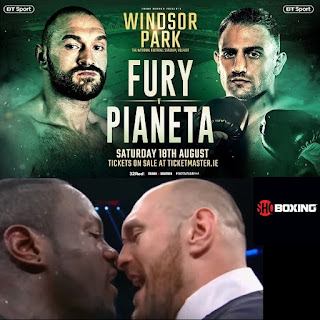 The road to the undisputed heavyweight championship of the world is a crooked one, full of detours, dead ends, and dark alleys. From the days of John L. Sullivan and "Gentleman" Jim Corbett, to Jack Johnson, to Max Schmeling, Max Baer, James J. Braddock, and Joe Louis, to Sonny Liston, Muhammad Ali, Joe Frazier, and George Foreman, to the Larry Holmes era with numerous other belt holders, to Mike Tyson, Evander Holyfield, Riddick Bowe, and Lennox Lewis, to Wladimir and Vitali Klitschko, and today and tomorrow, there are few examples of heavyweight title reigns beginning and ending smoothly. You could look it up, as "The Old Perfessor" Casey Stengel used to advise.

The man who ended the Klitschko era, Tyson Fury, with an ugly but clear-cut decision win over Wladimir Klitschko in November 2015, had his reign ended almost as soon as it started. Dropped not by Klitschko but by drugs, drink, and depression, Fury cancelled two scheduled rematches with Klitschko in 2016, lost his boxing license, and relinquished his belts while trying to restore his physical and mental health.

After ballooning up to somewhere near 400 pounds, and a sea of contradictory statements about whether or not he would ever fight again, Fury finally resumed training and returned in June of this year to fight, sort of anyway. His opponent was a blown-up cruiserweight journeyman, Sefer Seferi. The highlights of this fight, if it can be classified as such, were both men dancing the Ali Shuffle in the first round, Fury pausing in the ring while in the middle of the second round to watch a real fight in the crowd, a few punches mostly by Fury being thrown here and there, and Seferi quitting after the fourth round. Such a charade would have made P.T. Barnum envious.

But this was supposed to be just the start of the return of Tyson Fury, who mesmerized the media and some fans by regularly peppering his social media posts with an admixture of sometimes hilarious, outrageous, and bigoted remarks.

Fury's next fights this Saturday, August 18. His foe is the 33-year-old Francesco Pianeta, originally from Italy and fighting mainly out of Germany, who has a record of 35-4-1 with 21 KOs, but who has lost two of his last three fights. Also in June of this year, Pianeta lost a decision to 22-year-old Croatian prospect Petar Milas, who is now 12-0. In October 2017, Pianeta lost by seventh-round TKO to journeyman Kevin Johnson, who had been 2-5 in his previous fights. Pianeta's biggest fight was in 2013, when he was dominated and stopped by then-champ Wladimir Klitschko in six rounds. He is currently ranked number 140 in the world by BoxRec, whose computerized ratings are a matter of controversy but in this case give you an idea of Pianeta's standing in the heavyweight division.

But this Fury-Pianeta fight seems to be getting the most attention of any fight in the world this coming weekend, even though it is not the main event on its own card. That card takes place at the famed Windsor Park football stadium in Belfast, Northern Ireland, which is the city's national stadium, first opened in 1905 with renovations throughout the years, and is an outdoor facility.

The main event in Belfast will feature Belfast's own Carl Frampton, the former unified featherweight champion with a record of 25-1 and 14 KOs. He will face the unbeaten but untested Luke Jackson of Australia, who has a record of 16-0 with 7 KOs and has never fought any top level fighter, for some interim belt.

No doubt the expected crowd of some 20,000 will deliriously greet Frampton and sing his praises as long as that fight lasts. But the main attention of the world is focused on how Fury looks and performs in his showcase fight.

This card will be shown live in the U.K. on BT Sport. In the U.S., Showtime will be streaming it live on their Facebook and YouTube pages (I recommend using the latter), with a televised replay that night on Showtime Extreme.

Almost no one alive expects Pianeta to win, but there are still a few things to watch for in this match. Since returning from his layoff, how much of Fury's speed, dexterity, stamina, punch accuracy, and mental ability to navigate through an entire fight against a reasonably professional heavyweight remain? Right now thos is unknown. The Seferi farce proved nothing other than he can go through training, media events, and a semblance of a fight again. Fury's weight is also a factor. Whether or not he looks like he can handle or at least stay with for some time top competition anymore is the real issue here, and not the outcome of this fight.

According to all the prefight hype, the next stop on Fury's comeback tour is already planned, and will be previewed right after Pianeta is dispatched. WBC champ Deontay Wilder will be ringside in Windsor Park, and will no doubt reenact the postfight in-ring jawfest he had with Fury following his own knockout of Artur Szpilka back on January 16, 2016, in Brooklyn. That confrontation led nowhere then, but might to a major fight this fall. To do their shtick in the ring, both Fury and Wilder hopefully have cleared it with the Northern Ireland Branch of Equity, the performers' union.

The big prize in the heavyweight division is a shot at unified champion Anthony Joshua, which would draw in tens of millions of dollars and pounds in the U.K., U.S., and elsewhere. With the Joshua-Wilder negotiations, if there ever really were any serious attempt at making that fight this year, at best on hold, Wilder needs someone who is a major draw to face.

By himself Wilder is a mediocre attraction both on TV and in arenas. His WBC mandatory, Dominic Breazeale, who was knocked out by Joshua in 2016, hardly fits that bill. And as boxing writer and historian Frank Lotierzo recently pointed out, Wilder needs to up his international standing in order to increase his bargaining power if or when the talks with Joshua's camp resume. A convincing win over Fury, still laughably referred to by the meaningless and archaic term "linear champion", would greatly assist in that regard. And a Wilder-Fury fight would have Showtime exhume the plagued monster of boxing pay-per-views.

We have seen and heard so much from Fury over the years that it is often overlooked that he just turned 30 on August 12. But all of his life's drama and despair have made his career trajectory seem like it is at an end. Just his motivation for wanting to fight Wilder now, seemingly an end game fight, appears less clear.

Fury could fight Justin Bieber, Mr. Bean, and Graham Norton, and still get an enormous payday with Joshua. A win over Wilder would no doubt enhance his bargaining power, but going straight from the likes of Seferi and Pianeta to Wilder, ranked number two in the world by most observers, is a quite risky endeavor.

If they fight and Wilder defeats Fury, except by a Las Vegas-style decision, Fury's chance of meeting Joshua will be slim and at best for him delayed for some time. Fury thus either is confident that he has returned to form enough so as to defeat Wilder, or is not confident of that and just wants to get a major fight and then cash out. But if Fury does lose a disputed decision, he can still get Joshua.

The question remains: Why don't Fury and Wilder each take easier fights before facing Joshua?

One explanation is boxing's suicidal politics. Wilder fights on Showtime in the U.S., which Joshua and his promoter Eddie Hearn left for the streaming startup DAZN. Fury fights these days on BT Sport in the U.K. and is promoted by Frank Warren, all rivals of Hearn and the network with which he has a lucrative deal, Sky Sports.

A Wilder-Fury fight this fall is aimed at stealing the spotlight from Joshua and DAZN, which debuts in the U.S. with its first live show headlined by Joshua fighting Alexander Povetkin on September 22. DAZN is especially seen as a threat by Showtime, at present the top boxing network in America. It also seeks to establish an internationally recognized top heavyweight to be as marketable as Joshua, already anointed by SportsPro Media as the most marketable athlete in the world in any sport or country.

What the machinations are should become more evident after the Fury-Pianeta fight. Let's just hope it doesn't rain Saturday at Windsor Park.