No Holds Barred: Charles Farrell on Joshua vs. Parker and the Heavyweights 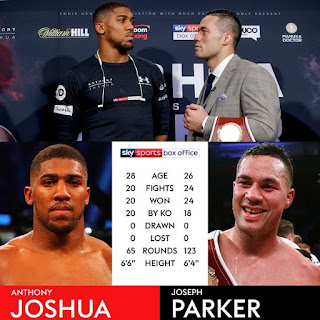 On this edition of No Holds Barred, host Eddie Goldman once again spoke with our colleague, correspondent, and the award-winning boxing writer, Charles Farrell.

We spoke with him by phone Tuesday.

Our main topic was the biggest fight of the year so far, the heavyweight title unification fight taking place this Saturday, March 31, between the two undefeated belt holders Anthony Joshua of the U.K. and Joseph Parker of New Zealand.

This fight takes place at the Principality Stadium in Cardiff, Wales. It will be televised live on Sky Sports Box Office in the U.K., Showtime in the U.S., and many other networks around the world.

We discussed how we see this fight going, why Joshua is deservedly a big favorite, what is likely to happen in the series of events which may lead to the crowning of an undisputed heavyweight champion of the world, the many options in the heavyweight division and business-wise for Joshua should he defeat Parker, the music of Marvin Gaye, and much more.

(Photo of Anthony Joshua and Joseph Parker by Esther Lin/Showtime.)

How to Screw Up the Jeff Horn-Terence Crawford Fight 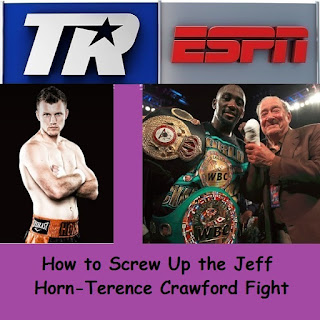 That Top Rank-ESPN deal is turning out to be more of a lemon than a peach. After last week's disastrous ratings for a good fight between Jose Ramirez and Amir Imam, now this duo is screwing up the Jeff Horn-Terence Crawford WBO welterweight title fight. After an injury to Crawford, the fight was postponed from April 14 to, reportedly, June 9. It will still be in Sin City AKA Las Vegas, but the TV situation is also becoming sinful.

First, it is not clear just where this fight will be televised in the U.S. New ESPN commissar Jimmy Pitaro had claimed before the fight was rescheduled that it would be on the paid ESPN+ app, which is supposed to launch sometime this spring. Bye bye, major free fights on ESPN. But the app still hasn't been launched, so this one could be aired on the regular ESPN network in the U.S.

At the same time as this fight, Showtime in the U.S. will be airing a quality PBC card from Los Angeles, headlined by the rematch between WBA featherweight "super" champion Leo Santa Cruz and WBA featherweight "regular" champion Abner Mares. Despite these bizarre designations of multiple "world" champions in the same weight class by the WBA, this fight should be top quality and action-packed, as was their first fight in 2015. Reportedly unbeaten WBA 154-pound champion Jermell Charlo will be making a title defense as the televised co-feature, so this card is shaping up to be must-see TV for fight fans.

Running a Top Rank card directly against the Showtime card, especially if it ends up on the ESPN+ paid app, sounds like a suicide mission business-wise. It presents the remaining stable of hardcore boxing viewers with an unpleasant choice of choosing to watch and focus upon one of these telecasts rather than the other. And it just plain sucks.

But wait, there's more, and it gets worse!

After defeating Manny Pacquiao last July, Australian Jeff Horn has become a major sports star in his home country. His fights now headline pay-per-views on Australia's Main Event and also New Zealand's Sky Arena. That is a major source of revenue for him.

However, already scheduled for the night of June 9 in the U.S., which would be June 10 in Australia, is another pay-per-view featuring another Australian star fighter. That is a UFC show featuring a title fight with Australian Robert Whittaker, their middleweight champion. This card takes place in Chicago, meaning that all these shows would be on at the same time.

True, there is only a very partial crossover between fans and viewers of boxing and UFC. But what this does create is a time conflict for Australia's Main Event, which had booked the UFC show months ago.

Now Main Event must either decide to show the boxing on tape-delay, get the Horn-Crawford fight rescheduled, or not show it at all. Rescheduling the time slot of either show will no doubt limit the numbers brought in for the one given the worse time. Since UFC was there first, and presumably has a valid contract with Main Event, that would put the boxing at a major disadvantage in these negotiations.

Horn's manager Dean Lonergan was quoted in the Australian press as saying that one potential option was to package both events into an Australian pay-per-view "blockbuster".

But as noted, the audiences for both shows are far from identical, and combining these shows somehow into one presentation will no doubt water down the marketing and promotion of both events.