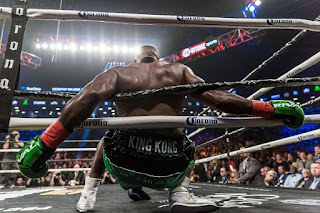 When I'm wrong, I'm wrong. Sure, I expected WBC champ Deontay Wilder to get a knockout victory Saturday night in Brooklyn over Luis "King Kong" Ortiz, but not without a little help from his friends. And yes, there was some of boxing's patented trickeration en route to Wilder's tenth-round TKO win. The New York commission's horse doctors inexplicably gave Wilder more time to rest after round seven, in which he was almost stopped near the end of that round by Ortiz. But was that extra breather decisive in allowing Wilder to avoid defeat? Probably not, as Ortiz came back to win rounds eight and nine but without scoring any knockdowns.

Then there are the judges, that merry trio who are paid, as is the norm, by the promoters. After nine rounds, they all had Wilder ahead 85-84. I had it 87-82 Ortiz, and Showtime's unofficial scorer had it 86-83 Ortiz. Ortiz would have needed a knockout to win the fight, since these judges were named Deaf, Dumb, and Blind.

But none of that gets to the basic mistake I, and several noted boxing writers who have covered and/or watched boxing for centuries, made. The premise, debunked in reality, was that Wilder could not win a clean fight against Ortiz, and thus in order to ensure the huge payday in a unification bout with Anthony Joshua, trickeration was in order.

I can only speak for myself, but there were several key miscalculations with this view. Knowing that boxing is a business first, second, and last, and has the aspects of being a sport mainly for show, was not mistaken. What was mistaken was thinking that the aging Ortiz had enough pop left in his old, injured hands to knock out the often amateurish Wilder.

Ortiz was supposed to face journeyman Derric Rossy last year in a stay busy fight, but had to withdraw because of a hand injury. At this fight's prefight press conference, Ortiz mysteriously wore black gloves. The explanation that he was cold was preposterous, as the presser was indoors and the New York temperature that day was around 60 degrees F. Whatever the case, Ortiz's steady assault on Wilder only led to sporadic moments when he had Wilder hurt.

And Ortiz had a classic and basic game plan. The lefty Ortiz circled to the righty Wilder's right, staying away from Wilder's powerful right hand, and landed effective jabs and counters to a seemingly befuddled Wilder. That changed in the fifth round, when a Wilder right dropped Ortiz, showing he could not use that strategy the entire fight. But Ortiz came back late in the sixth and then hurt Wilder badly late in the seventh.

Even with the judges, doctors, and who knows else against him, if Ortiz had knocked out Wilder, he would have won the fight. But it was Ortiz who was the one knocked out, with the finishing touch being a right uppercut by Wilder that brought back memories of Anthony Joshua's 11th-round uppercut on Wladimir Klitschko last year.

It is good and necessary to be cynical about what goes on in boxing. It is important for writers and journalists to expose the nonsense. And we are right far more than when we are wrong in doing so. But sometimes we get too exuberant, too suspicious, and make too many assumptions.

So I'm actually glad that I, and we, were wrong. What we saw was not a pretty or technically gorgeous fight, but one that was relatively unpredictable with numerous dramatic high points, and, of course, a conclusive finish.

But I'm also not upset that we warned of trickeration, because most of the mugs covering boxing these days refuse to discuss such doings. Yeah, we were wrong this time, but we have been and will be right far more times in the future. And I'd rather be occasionally wrong and honest than a dishonest shill and propagandist.