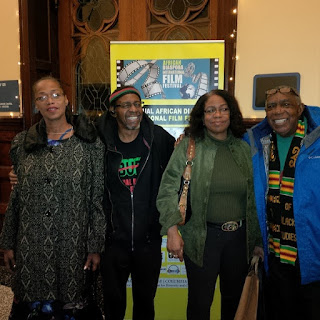 On this edition of No Holds Barred, host Eddie Goldman once again spoke with human right activist Malaak Shabazz, who is the youngest daughter of Malcolm X.

With February being designated Black History Month, she has been traveling to many events which have provided information and analysis on the life and times of her father.

She has just returned home to New York from Washington, D.C., from the Smithsonian's National Museum of African American History and Culture, where there was a screening of the new documentary "The Lost Tapes: Malcolm X".

This documentary will begin airing on TV February 26 on the Smithsonian Channel.

Next up is Los Angeles for the Pan African Film Festival, where on February 9 there will be the first of three screenings of the documentary film "Malcolm X: An Overwhelming Influence on the Black Power Movement".

This highly acclaimed film, directed by Thomas Muhammad, had its public debut in December at the the African Diaspora International Film Festival in New York. It features original interviews with veterans of the civil rights and Black liberation movements of the 1960s who discuss Malcolm X's influence and participation in these struggles in the South at that time.

Then it is back to D.C. for two performances on February 22 of A. Peter Bailey's play "Malcolm, Martin, Medgar".

She is the narrator of this imaginary and contemporary encounter between Malcolm X and civil rights leaders Dr. Martin Luther King Jr. and Medgar Evers. A. Peter Bailey was one of the closest associates of Malcolm X at the time of Malcolm's passing in 1965.

We spoke with her by phone Friday.

"Most people," she said of her father, "just think he was just here in New York or Brooklyn, when he was all over the United States, as well as London, France, Africa.

"So, I was raised as a global child. He was an advocate for the African diaspora on a global level.

"And I think these two films, and many others that are going to be coming out, will show that he was an advocate for the African diaspora."

Documenting and disseminating accurate information on this history is especially essential in today's era of Trumpism with its open promotion of racism and white supremacy.

We also discussed Malcolm X's emphasis on reading and education, the key contributions of Dr. Betty Shabazz, the setting up of the Shabazz Center in New York on the site of the old Audubon Ballroom, how there will also be more events for Black History Month in which Malaak Shabazz will participate which will be announced shortly, and much, much more.