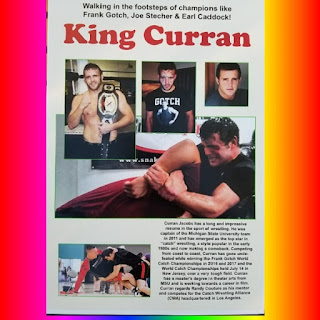 On this edition of No Holds Barred, host Eddie Goldman once again spoke with catch wrestler Curran "The Giant Slayer" Jacobs.

He wrestled about an hour and a half that night, with only 10- to 15-minute breaks between matches, and thus earned the right to be called not only by his new nickname of the "Giant Slayer", but also the best catch wrestler on the planet.

We spoke with Curran Jacobs by phone Tuesday.

After this tournament he had to rest up and heal from the injuries he suffered during it.

"I've never been in that much pain in my life, and I've wrestled all of my life. And that was the toughest tournament I've ever been in, and that was the most damage my body's ever taken. It was horrible, horrible pain, but I'm feeling great now.

"I'm looking to enjoy some more time off before I hit the mat."

Next up for him as he completes his healing is not a tournament, but conducting a catch wrestling seminar. This will be this Saturday, August 4, at the 2018 Frank Gotch World Catch Wrestling Tournament.

Organized by the Catch Wrestling Alliance, this event takes place at the Westside Training Center, at Cheviot Hills/Palms, 3272 Motor Avenue, Suite D, Los Angeles, California 90034. This is the third annual Gotch Tournament, and its first two years, Curran Jacobs was victorious in every match he wrestled there.

We discussed how all his three matches went at the July 14 tournament, how he adapted Muhammad Ali's Rope-A-Dope technique to catch wrestling to wear down and defeat his three bigger opponents, how these matches and catch wrestling are "physical chess", how his "big mouth persona" is now a thing of the past, his dual career plans as a wrestler and an actor and how they sometimes conflict, why catch wrestling can develop to be "wrestling's NFL", and much, much more.