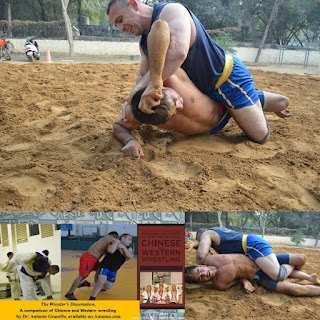 On this edition of No Holds Barred, host Eddie Goldman once again spoke with the writer, web show host, MMA fighter, and wrestler, Antonio Graceffo.

Our main topic was kushti wrestling, the traditional style of wrestling in India which remains one of the most popular in the world, but which is little known outside that region.

In India, there are many combat sports, including a Pro Wrestling League which runs real matches and is televised, featuring top wrestlers from India and around the world. But it is not the most popular form of wrestling or combat sport in India.

"In terms of numbers, it would have to be kushti as number one, because you're talking about millions and millions," he said.

His coach had estimated that there are 50 million kushti wrestlers in India, and showed him photos of crowds of 100,000 people in villages watching these events. Nonetheless, kushti does not get the attention or publicity that its widespread popularity might suggest.

"The difference, though, is that MMA, and then the Professional Wrestling League, and boxing are probably working through the higher echelons of society, in other words, the rich people in Mumbai, the business people, and things like that," he said.

"So the problem is that kushti doesn't have any of that support. For right now, though, kushti is by far the absolute biggest thing."

We discussed the differences between kushti, where competition takes place on a clay surface, and other styles which are called "mat wrestling". We also discussed how kushti is part of traditional Indian culture, its rules, why as a professional sport kushti has attracted wrestlers who might otherwise compete in international wrestling and the Olympics, the legacy of the 20th century wrestler known as the Great Gama who is regarded in wrestling as a "god", the popular Indian film "Dangal" about wrestling in India, how grappling is continuing to grow around the world, and much, much more.