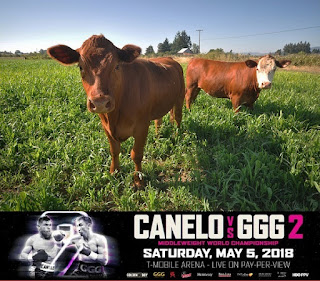 (It's too late for an official April Fool's story, but I did just think of a good one.)

To show support for one of their favorite promoters, the Boxing Writers Association of America is moving the location of its annual awards dinner. Originally scheduled for May 11 in New York, it will now, for the first time, take place outside the U.S.

The new location is Mexico City, Mexico. This location was chosen specifically to show support to Golden Boy Promotions, whose top fighter, Saul "Canelo" Alvarez, the best fighter in the world, had to withdraw from his scheduled May 5 rematch with Gennady "GGG" Golovkin due to a failed drug test for clenbuterol.

It is well known that clenbuterol is found in Mexican meat. It is also well known that "Canelo" would never do anything wrong or mean. Thus, the dinner will show solidarity by being held at Mexico City's six-star restaurant, the chic Cocina Clenbuterola.