The Downlow on Showtime's Boxing Upfront 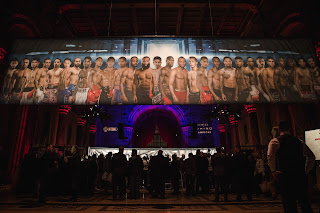 But amidst all the gushing over the premium network Showtime's private boxing "upfront" event Wednesday, which was live streamed and held at the bourgie Cipriani's 42nd Street in New York, here is what is missing from most of the discussion I have seen:

Notably absent at this event was the most popular fighter in the world, heavyweight champion Anthony Joshua. His fights have been shown by Showtime in the U.S. of late, and Showtime apparently can match any offer to show his March 31 title unification fight with Joseph Parker. HBO, with a budget unburdened by contracts with Top Rank fighters and lightened by the retirements of Andre Ward and Wladimir Klitschko, already tried to grab Joshua when he fought Carlos Takam this past October, and aired his classic fight with Klitschko in April on same-day tape-delay. With Joshua's promoter Eddie Hearn dealing primarily with HBO through his new Matchroom Boxing USA, will Joshua soon be jumping to HBO?

Note also that with one exception, all the fights announced by Showtime for the first half of 2018 are in the U.S., with only the May 19 Adonis Stevenson-Badou Jack fight scheduled for just north of the border in Canada. No other international fights have been announced, although they always can be added. In the past few years Showtime has aired some fights from the U.K., which are shown live in the afternoons in the U.S. So far nothing.

For all the glitz of this announcement, there are only a few fighters in this lineup who are widely accepted as being the tops in their divisions. While this, of course, is a subjective judgment, arguably only Leo Santa Cruz at featherweight, Keith Thurman at welterweight, and Erislandy Lara at junior middleweight would get my vote for number one in their respective weight classes in an honest, independent poll. Again, this can be debated, but it does show that there may be less in this announcement than meets the eye.

Besides the lack of any international fights and anything outside North America, once again the talent-rich World Boxing Super Series is snubbed. The semis and finals of their cruiserweight and super middleweight tournaments take place this year, and thus far for these highly-anticipated fights, it looks like the American TV suits have their American heads in the sand (or maybe stuck up somewhere else).

And there are also no women's fights listed, although Showtime has featured Claressa Shields on their Friday night ShoBox series.

Perhaps most telling was what this says about the PBC, Premier Boxing Champions. This series was supposed to bring top fights back to free TV in the U.S. by first buying time to air these fights on the non-pay networks. But PBC's top fighters and fights are featured in Showtime's schedule, thus signaling that PBC is likely throwing in the towel on its hopes of ever getting a major TV rights deal from a non-premium network.

There were plenty of fools and shills for rival boxing groups who declared PBC dead-on-arrival when it started in 2015, but PBC did manage to show the fights with the largest audiences in the U.S. these past few years. However, inconsistent matchmaking, failure to understand the Internet and social media, typical boxing paranoia about being a transparent organization, impossible to follow TV scheduling, endless postponing or just not making the right fights where the best fight the best, and more seem to have returned this venture from whence it sprung: pay TV, on Showtime.

The gushers were also noting that the January 20 Showtime card headlined by the Errol Spence Jr.-Lamont Peterson fight drew a relatively good average audience of 637,000. But that was less than the average of the UFC prelims on FS1, which was 905,000, and the Bellator MMA card on Paramount (formerly Spike) of 770,000, both on around the same time. (http://www.showbuzzdaily.com/articles/showbuzzdailys-top-150-saturday-cable-originals-network-finals-1-20-2018.html)

For Showtime, which relies on subscriber revenue and has no outside advertising, this number might be good. But for PBC's stated goal of showcasing the fighters in front of a large general audience, it is bad.

Hiding these fights behind a pay TV wall has its effects. The print edition of Sunday's New York Daily News, which long had been known for providing the major boxing coverage in New York, only ran an AP wire service story about this fight, and even after the show ended relatively early for boxing, before 11:30 PM EST. Also, if you search the web sites of both The New York Times and New York Daily News, you will find nothing on Showtime's Wednesday event. Such are not exactly endorsements of their media strategies.

Top Rank's move to ESPN last year has been accompanied by boasting of how well they are already doing. According to a Top Rank and ESPN press release, their shows in primetime were said to have averaged 1,575,000 viewers on ESPN and 95,000 on ESPN Deportes. They also said the 12 most-viewed fights on U.S. cable in 2017 were Top Rank on ESPN fights. But they also are reportedly planning on running pay-per-view fights soon, so here comes the paywall again for the top fights.

So will the recent revival of boxing in the U.S. see a race to the top, or once again a race to the bottom? Sun Tzu noted in The Art of War in the fifth century B.C.E. that: "All warfare is based on deception." Keep this in mind when you read all these cheery announcements.

The full Showtime-PBC press release can be read at http://www.premierboxingchampions.com/news/showtime-sports-and-premier-boxing-champions-announce-industry-leading-all-star-boxing-schedule.