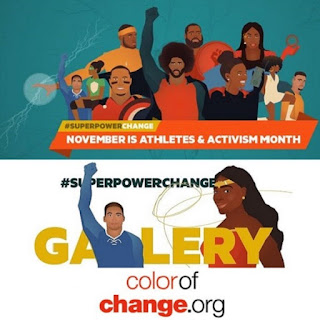 On this edition of No Holds Barred, host Eddie Goldman spoke with Jade Magnus Ogunnaike, co-director of the organizing department at Color of Change.

Color of Change is the largest online racial justice organization in the U.S.

To support the growing number of athletes in the U.S. who are part of a movement calling for racial justice and an end to police violence, they have designated November as Athletes and Activism Month.

We spoke with Jade Magnus Ogunnaike by phone Monday.

Much of what is currently being done has been inspired by former San Francisco 49ers' quarterback Colin Kaepernick. In August 2016, he began protesting against police brutality and racist police killings of Black people during the pre-game playing of the American national anthem before NFL games by taking a knee instead of standing. While no NFL team has signed Kaepernick this season, leading to a lawsuit charging collusion of the NFL owners against him, his protest has spread, with numerous other NFL players, athletes from other sports, and non-athletes likewise either kneeling or sitting during the playing of that song.

"Last year, when Colin Kaepernick initially took a knee, that was the jumping off point for a new era of athletes and activism," she said.

"And since that happened, we've seen a groundswell of activism, both local, national, and all sports, from tennis to basketball to football, of athletes really taking a stand, and taking a stand against white supremacy.

"So this month, we decided to celebrate November as Athletes and Activism Month, especially because the NFL Players Coalition asked Roger Goodell, the NFL commissioner, to designate November as a month of racial equity and criminal justice reform. Because Roger Goodell did not implement that, Color of Change took up the charge, and we have a lot of things going on this month in celebration of Athletes and Activism."

We discussed their activities both online and offline for Athletes and Activism Month; how these are protests "against systematic oppression of Black folks" and not against the American flag or military members; how many athletes are in a precarious position which prevents them from joining these protests; how the U.S. Department of Defense began paying millions of dollars to sports leagues like the NFL to play the national anthem with the athletes on the field and stage patriotic displays; the attacks on Black journalists such as Jemele Hill of ESPN and others in the media who have supported these protests; the role of athletes in combat sports such as boxing and MMA; what people can do to support these activities, and much more.