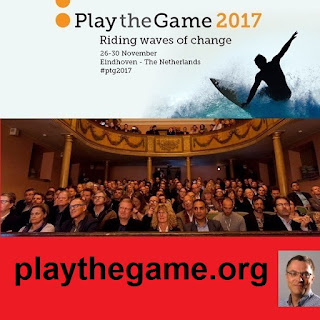 On this edition of No Holds Barred, host Eddie Goldman once again spoke with Jens Sejer Andersen, the international director of Play the Game.

Play the Game is an international conference and communication initiative aiming to strengthen the ethical foundation of sport and promote democracy, transparency, and freedom of expression in sport.

Their biannual international conference, Play the Game 2017, will take place 26-30 November at the Van der Valk Hotel Eindhoven in Eindhoven, Netherlands. This is THE major world event advocating sport reform. The programme for the conference so far can be seen here.

Many sessions will be live-streamed and/or recorded for later viewing. Speakers and panelists will include academics, journalists, sports officials, athletes, and other sports stakeholders.

Featured among the many topics will be discussion of the ongoing Russian state-sponsored doping scandals. Among the speakers and panelists will be:

Professor Richard H. McLaren, who led the investigation and issued reports for the World Anti-Doping Agency (WADA) which documented state-sponsored doping in Russia in sport; David Howman, chairman of the Athletics Integrity of the IAAF and former director-general of WADA; Craig Reedie, the current president of WADA; IOC member Richard Pound, who was the first president of WADA; Travis Tygart, CEO of the U.S. Anti-Doping Agency (USADA); journalist Hajo Seppelt, who has played a key role exposing these doping scandals; journalists Jens Weinreich and Declan Hill, who have played key roles in exposing corruption and match-fixing in international football and other sports; Brendan Schwab, executive director of the World Players Association, UNI Global Union; and numerous others.

Among the many panels and sessions will be one entitled "Martial Arts: The need for joint regulation". Organized by Sport&Society from the Netherlands and Sport&Society from Belgium, the panel seeks to examine issues related to the failure of self-regulation in the "Full Contact Martial Arts and Combat Sports (FCMACS)" and the issues of regulation by governments. Speakers will include Marloes Coenen, the former Strikeforce women's bantamweight champion who retired as an MMA fighter earlier this year, and Michal Buchel of the International Sambo Federation (FIAS), as well as academics and sports officials from Belgium and the Netherlands.

We spoke with Jens Sejer Andersen by Skype Wednesday.

"Personally, also, although I shouldn't be surprised after watching international sports politics for 20 years now, I can't help becoming surprised by the day about how all these things are developing," he said.

"And I think one of the reasons that they are developing is simply that sport does not have a credible leadership.

"As long as the people on top, at the top, the helmet of these organizations, remain, if not the same individuals then the same family of individuals, as they also like to call themselves, then we will not see a real honest, radical change, and chances are that the skeletons will keep on dropping out of the closet. And the closet holds more skeletons that you would believe when you just take a look at them."

We also discussed more on this conference; the growth of its influence parallel with the growth and exposure of the myriad scandals and negative shift in public opinion regarding world sport; the various possible scenarios of how the IOC will or will not deal with the continued non-compliance of Russia's anti-doping agency (RUSADA) with WADA, with the 2018 Winter Olympic Games in Pyeongchang, Korea, set to take place in February, and the 2018 FIFA World Cup scheduled to take place in Russia in June and July; issues that are more focused on U.S. sport such as the "Take A Knee" protests by athletes and supporters against racist police killing and brutality; and much more.

They finally did it. Top Rank boxing on ESPN in the U.S. this past Saturday, November 11, got about twice as many viewers as the HBO card. ESPN's card featured Artur Beterbiev vs. Enrico Köelling for the IBF light heavyweight belt and Jose Ramirez vs. Mike Reed. HBO's card was headlined by Daniel Jacobs vs. Luis Arias.

According to the Nielsen ratings listed on ShowBuzzDaily, the ESPN show averaged 1,487,000 viewers. The HBO card had its highest segment during the Jacob-Arias fight, averaging 706,000 viewers.

Top Rank stopped working with HBO earlier this year and signed an exclusive four-year deal with ESPN. According to a report by Bill King on Sports Business Journal, this Top Rank-ESPN deal is "a four-year rights deal that a source familiar with the negotiations valued at eight figures annually."

The figure of 1,487,000 would make it the fifth-most watched boxing show on U.S. broadcast or cable this year, and the second-highest on cable, only behind the July 2 Manny Pacquiao vs. Jeff Horn fight on ESPN with 2,810,000 viewers.