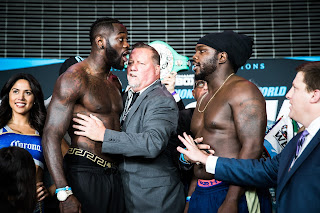 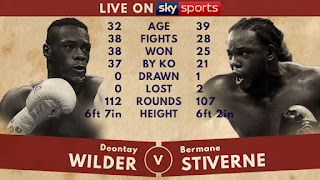 Another Saturday, another 'world heavyweight championship' fight. Will Deontay Wilder finally knock out Bermane Stiverne, the only fighter to take him the distance? Will Stiverne defy the bookies and experts to score a major upset? Will there be trickeration galore, with Don King in the house and the geniuses of the New York State Athletic Commission running the show? Will Anthony Joshua make a surprise run-in from the back and hit Wilder with a steel chair? Will this fight just make people sick and disgusted? Or will we see a clean and historic heavyweight classic? (Photo of Wilder and Stiverne from Amanda Westcott/Showtime.)

No Holds Barred: Joshua Disappoints, But Will Wilder and Big Baby Impress? 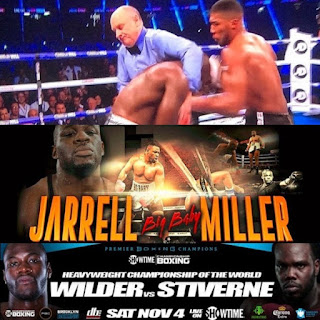 On this edition of No Holds Barred, host Eddie Goldman discusses Anthony Joshua's tenth-round TKO victory over Carlos Takam on October 28, and the controversies it caused regarding the fast stoppage and Joshua's less-than-stellar performance.

Next in an unofficial trilogy of top heavyweight fights will be WBC champion Deontay Wilder's rematch with Bermane Stiverne this Saturday, November 4. Wilder is 38-0 with 37 knockouts, Stiverne being his lone opponent not stopped within the distance. This rematch of their 2015 fight takes place at Brooklyn's Barclays Center and will be shown in the U.S. on Showtime and in the U.K. on Sky Sports.

Jarrell "Big Baby" Miller, 19-0-1 with 17 KOs, wants to get into title contention when he faces former title challenger Mariusz Wach on November 11 at the Nassau Coliseum in Uniondale, Long Island, New York, in a fight which will be shown on HBO in the U.S.

We spoke with "Big Baby" and promoter Eddie Hearn on a media conference call this past week.

In addition, on his media conference call, Deontay Wilder was asked about racial inequality in the U.S., in light of the growing revolt by athletes against racist killings by police. We play Wilder's remarks on that subject, complete and unedited.

And we discuss what all this means for the heavyweight division, and much more.

You can play or download No Hold and here and here. If one link does not work, please try another.