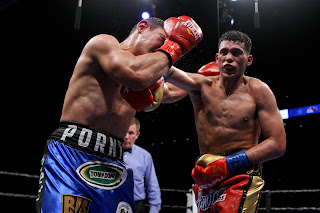 Here are the raw ratings for Saturday's boxing shows on U.S. TV.

The HBO telecast of Crawford-Diaz averaged 961,000. The Showtime telecast of Russell-Escandon averaged 481,000. The PBC on FS1 telecast of Benavidez-Medina (my fight of the night), on at the same time as HBO's boxing, averaged 364,000. 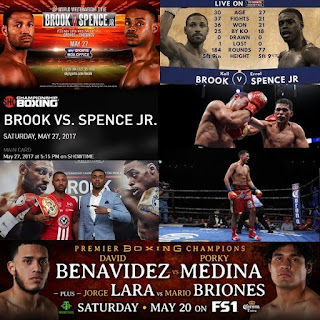 On this edition of No Holds Barred, host Eddie Goldman spoke with IBF welterweight champion Kell Brook and unbeaten challenger Errol Spence Jr., who fight this Saturday, May 27. We also comment on this past Saturday's full day of fights, and why the David Benavidez-Rogelio "Porky" Medina fight deserved the honor of being known as the televised fight of the night.

Brook (36-1, 25 KOs) and Spence (21-0, 18 KOs) face each other in the main event of a card at the Bramall Lane football stadium in Sheffield, U.K., which will be shown live in the U.K. on Sky Sports Box Office and live in the U.S. on Showtime. The winner will likely be regarded as the top fighter in the talent-rich welterweight division.

We spoke with both Kell Brook and Errol Spence Jr. on a recent media conference call, in which they both promised victory.

This past Saturday, May 20, there were several important fights around the world. Gervonta Davis, Gary Russell Jr., and the masterful Terence Crawford all had dominating performances to retain their respective belts. There was also a disgraceful robbery, in which Rances Barthelemy was given a gift and undeserved decision win over Kiryl Relikh, and a riot in and outside the ring following Jose Uzcategui's disqualification loss against Andre Dirrell after he hit him after the bell sounded in the eighth round and Dirrell could not continue.

The high point of the night took place in the main event of a PBC card on FS1 which many may have passed up hoping that for a change HBO, which had its telecast on at the same time, would present something noteworthy.

The PBC on FS1 card was headlined by what turned out to be an eight-round, non-stop battle between budding star, the 20-year-old David Benadivez, and veteran Rogelio "Porky" Medina, who many remember last year gave IBF super middleweight champ James DeGale all he could handle. For Benavidez, this was his toughest opponent yet, and in what was billed as a 168-pound title eliminator, he established himself as both a legitimate contender and a must-see fighter.

We discussed why the Benavidez-Medina fight was fight of the night, the need for this fight to be replayed both on TV and online, the need for PBC to set up its own online video service showing full fights, how HBO and his promoters have completely botched the marketing and promotion of Terence Crawford, and much more.