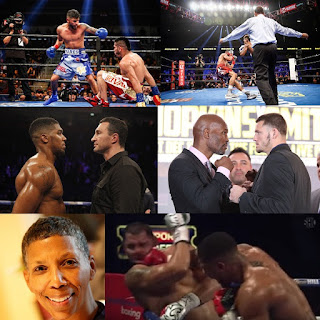 On this edition of No Holds Barred, host Eddie Goldman once again spoke with our correspondent Chris Baldwin.

Our subject was the main fights of Super Duper Saturday, December 10.

Unbeaten IBF heavyweight champ Anthony Joshua (18-0, 18 KOs) kept his record perfect by knocking out Eric Molina (25-4, 19 KOs) in the third round of a fight headlining a card in Manchester, England.

Abner Mares (30-2-1, 15 KOs) won the WBA featherweight belt with a split decision over defending champion Jesus Cuellar (28-2, 21 KOs). This fight took place at the Galen Center on the campus of USC in Los Angeles.

On that same card, in a battle of two unbeaten young fighters, Jermall Charlo (25-0, 19 KOs) retained his IBF junior middleweight belt with a fifth-round knockout over Julian "J-Rock" Williams (22-1-1, 14 KOs).

We spoke with Chris Baldwin, who covered the card in Los Angeles, by phone Wednesday.

We discussed these fights and their significance, especially for the turbulent and intriguing heavyweight division.

This coming Saturday, December 17, one of boxing's greats will have what he says will be his final fight. The 51-year-old Bernard Hopkins (55-7-2, 32 KOs) will face Joe Smith Jr. (22-1, 18 KOs) at The Forum in Inglewood, California. We spoke with Bernard Hopkins and Joe Smith Jr. on a recent media conference call.