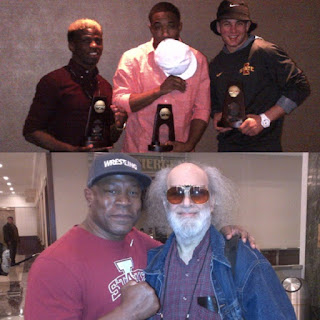 On this edition of No Holds Barred, host Eddie Goldman once again spoke with Kevin Jackson, the Olympic gold medalist and two-time world champion freestyle wrestler, who is the head wrestling coach for the legendary Iowa State Cyclones.

We spoke with Coach Kevin Jackson by phone Wednesday.

"We're excited about the year," said Coach Jackson. 'It's my first time being able to return three All-Americans to our starting lineup. We have seven guys who have qualified for the NCAA championship, so they have seen that level of competition."

As for the preseason rankings, which have Iowa State in the middle of the top 25, he said, "We don't pay too much attention to the rankings. I can't remember when the last time the rankings held true," also noting that with three returning All-Americans, "very few teams can match that."

He added, "If our young guys can connect to what our seniors and juniors have done, I think we're going to feel pretty good about our results."

We discussed more on the projected starting lineup for Iowa State, how they have one of the top recruiting classes in the U.S., highlights of this season's schedule, proposals to move the college wrestling season to one semester and have the national tournament in April, why for college wrestling "to grow, change is necessary", and much, much more.