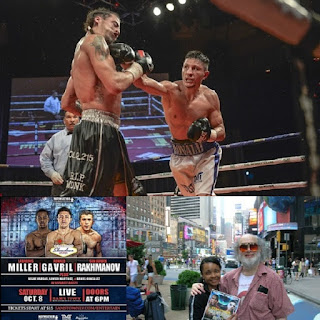 (Photo of Gavril and Brooker by Idris Erba/Mayweather Promotions)

On this edition of No Holds Barred, host Eddie Goldman once again spoke with our colleague and correspondent Keisha Morrisey.

On October 8, she covered the debut card of a new monthly boxing series, the Sin City Showdown, which was promoted by Mayweather Promotions, and took place at Sam's Town Live in Las Vegas, Nevada.

We spoke with her by phone Saturday.

In the main event, Ronald Gavril (17-1, 13 KOs) arose from a fifth-round knockdown to score two knockdowns of his own in the tenth round against Christopher Brooker (11-2, 5 KOs), after which referee Tony Weeks stopped the fight, resulting in a TKO victory for Gavril. With this win, Gavril captured the vacant NABF super middleweight belt. This was an exciting, competitive, back-and-forth fight, which put Gavril in the mix to fight for a WBC title.

"They presented an excellent night of classic boxing bouts," Keisha Morrisey said. She stressed "the importance of the club fights night in the sport of boxing."

She noted, "For me, the club fights are always the best fights, because that's where you get the most action."

We discussed why such cards often provide "the best fights in town", the TMT fighters on this card, what the future might hold for Floyd Mayweather, the next show in this series on November 4, and much, much more.