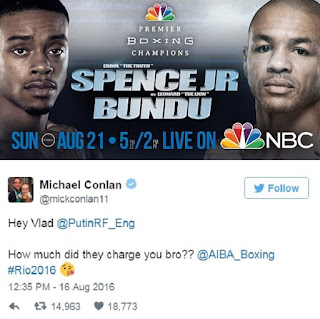 On this edition of No Holds Barred, host Eddie Goldman spoke with welterweights Errol Spence Jr. and Leonard Bundu who fight Sunday, August 21, in Brooklyn, and discussed the latest Olympic boxing robberies.

The 26-year-old Spence (20-0, 17 KOs) will face the 41-year-old Bundu (33-1-2, 12 KOs) in an IBF welterweight title eliminator at the new outdoor Ford Amphitheater at the Coney Island Boardwalk in Brooklyn, New York. This fight will be televised live in the U.S. on NBC, in the U.K. on BoxNation, and in Italy on Sportitalia TV. The NBC telecast is scheduled to start about 5 PM EDT, following the Olympic men's basketball gold medal game.

As for boxing at the Rio Olympics, on Monday, the heavyweight gold medal fight between Evgeny Tishchenko of Russia and Vassily Levit of Kazakhstan ended not surprisingly in yet another disgraceful robbery. Tishchenko was awarded a unanimous decision, despite being outfought for all three rounds, and being visibly hurt and cut in the final round. The judges' decision was loudly booed by the fans. Many are calling this the worst robbery in Olympic boxing since the infamous "loss" by Roy Jones Jr. at the 1988 Seoul Olympics in a verdict that was bought and paid for.

But just one day later, there was competition for that dishonor as the worst Olympic boxing robbery, in the bantamweight quarterfinal fight between Michael Conlan of Ireland and Vladimir Nikitin of -- where else? -- Russia. In this fight, Conlan clearly won at least two of the three rounds, with more and cleaner punches. But the judges scored it a unanimous decision for Nikitin, with two of them giving all three rounds to the Russian fighter.

There were warnings that this type of corruption would occur at the Rio 2016 boxing, such as in an article in the Guardian of the U.K., written before the start of the Olympics, called Rio 2016: Olympic boxing tournament hit by corruption allegations. The article explained, based on reports from whistleblowers, how some Olympic boxing officials were actually "meeting before major championships to decide on certain bouts."

Once again, this shows that the International Olympic Committee and Russia are the world champions of sport corruption.

For Errol Spence, who is considered a rising star and a soon-to-be world champion, this fight with Bundu is another in a series of fights with journeymen where his performance will be compared to those of others who have defeated these same opponents. Spence has won his last seven fights by TKOs, including defeating veterans Chris Algieri and Alejandro Barrera by stoppage for the first time in their careers. How he will look and do against Bundu, who has also never been stopped, is more of a question than who will win this fight.

We spoke with both Errol Spence Jr. and Leonard Bundu on a recent media conference call to get their views coming into this fight.