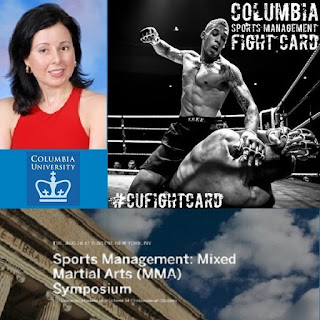 On this edition of No Holds Barred, host Eddie Goldman spoke with sports and entertainment lawyer Carla Varriale.

She is a member of the faculty at Columbia University's School of Professional Studies Sports Management Program.

They will be holding a symposium, which is the first educational forum dedicated to MMA in New York, called Fight Card.

This event is free and open to the public, and will take place Tuesday, August 16, starting at 6 PM EDT at Columbia University's Schermerhorn Hall in Manhattan.

The symposium will be moderated by MMA journalist Jim Genia, with panelists including Renzo Gracie, Mario Mercado, Jr., Justin Klein, David Berlin, David Weinraub, and Rene Dreifuss. There will also be a question-and-answer session.

You can register here.

We spoke with Carla Varriale by phone Thursday.

The symposium, she said, "came about when the students from the sports management program wanted to study why, after all this time now that mixed martial arts has become legal in New York, what the next steps forward for the sport were, and what the challenges and opportunities for it were."

We also discussed the effect on MMA of the turmoil in the New York State Athletic Commission, extending the Muhammad Ali Boxing Reform Act to include MMA fighters, how she got involved in examining and teaching about all these issues, and much more.