No Holds Barred Tenth Anniversary: Bob Carson on the Spectacle of MMA 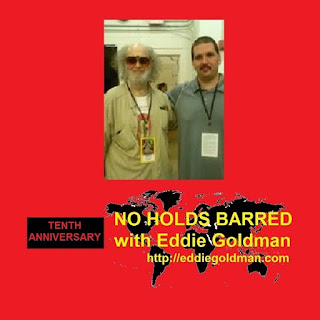 On this edition of No Holds Barred, host Eddie Goldman once again spoke with Bob Carson, the host of Carson's Corner.

This is another in a series of discussions celebrating the tenth anniversary of this No Holds Barred podcast, which began in March 2006. These interviews will focus both on the legacy and issues raised over the years on this show, as well as contemporary issues and the future of the combat sports and martial arts.

While we both have been covering mixed martial arts for a long time, the direction it has gone in is not what we expected when we first started. MMA is closer to pro "wrestling" than anything else, with the exception that its fights are usually real.

On top of that, there is heightened awareness of the dangers of head trauma and brain injuries in MMA, as striking is given precedence over grappling by promoters and networks. As a result, the future of MMA is far from secure.

"You can sort of liken it to smoking in America. Now it's almost become socially unacceptable to smoke," he said, with MMA in danger of declining in a similar fashion.

We discussed numerous issues facing MMA and other sports, including how the so-called MMA "media" covers it; comparisons of the structure of MMA and boxing and their treatment of fighters; the absurd talk of a boxing match between Floyd Mayweather and Conor McGregor; how world sport is in crisis, including the mounting Olympic corruption and doping scandals; how MMA fans should ask what they are watching and why; the lack of art in today's MMA; what a possible sale of UFC might or might not mean; the role of grappling and wrestling events of various styles; and much, much more.