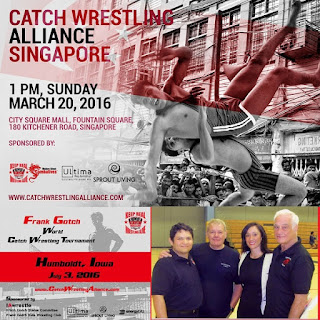 On this edition of No Holds Barred, host Eddie Goldman spoke with Raul Ramirez of the Catch Wrestling Alliance.

Their next event will mark the first time that catch wrestling will take place in Singapore. On Sunday, March 20, there will be a catch wrestling event locally hosted by the Kapap Academy (Singapore), a member of Catch Wrestling Alliance. The location is the City Square Mall, Fountain Square, 180 Kitchener Road, Singapore.

We spoke with Raul Ramirez by phone Monday.

This event will be free to watch, and video will be recorded and later posted online. There will be individual matches involving wrestlers from many countries. The rules are that you can only win by pin or submission, with all submissions allowed except strangleholds. There are no points in these matches, which each have a 20-minute time limit. If there is no pin or submission in that time, the referee and outside judge will determine the winner.

The Catch Wrestling Alliance also has created a youth wrestling program in the Emerson Sports Academy at Ralph Waldo Emerson Charter Middle School in West Los Angeles, California. We also discussed the importance of bringing catch wrestling to the youth, both for them and for the sport of wrestling.

In addition, we discussed the July 3 Frank Gotch World Catch Wrestling Tournament in Humboldt, Iowa; the process of introducing more of the martial arts community to catch wrestling; the need to develop real professional catch wrestling; and much more.