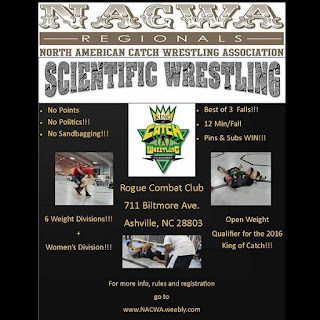 On this edition of No Holds Barred, host Eddie Goldman once again spoke with Dan Kanagie of the North American Catch Wrestling Association.

Their first event of 2016 will be the Carolina Catch Wrestling Challenge. It will take place Saturday, April 2, at the Rogue Combat Club, 711 Biltmore Avenue, Asheville, North Carolina 28803.

We spoke with Dan Kanagie by phone Tuesday.

"It's our first event of this year," he said.

"We're at a new location, a new area that we're adding on to, hoping to be expanding to even more states in the new year."

We discussed the rules of this catch wrestling event, where there are no points, you can only win by pin or submission, and each match is two out of three falls.

"These rules cross all boundaries," he said. "This is the most inclusive ruleset of all tournaments on the market."

We also discussed how there will be tournaments in several weight classes, how the open weight tournament at this event is a state qualifier for the 2016 King of Catch Wrestling event later this year, what the future of catch wrestling should look like, the need for catch wrestling to be organized independently and separately from the corrupt Olympic movement, and much, much more.

A No Holds Barred World