No Holds Barred: Is Anthony Joshua Boxing's Next Superstar? 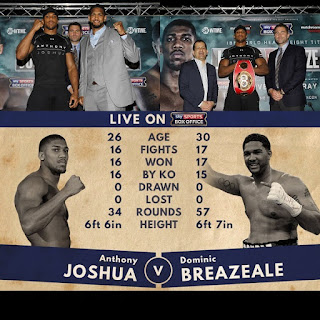 On this edition of No Holds Barred, host Eddie Goldman spoke with boxers Anthony Joshua and Dominic Breazeale, and Stephen Espinoza, Executive Vice President and General Manager, Showtime Sports, and Eddie Hearn, President of Matchroom Sports, about the June 25 Joshua-Breazeale fight and the future of boxing and the heavyweight division.

The fight between the IBF champ Joshua (16-0, 16 KOs) and the challenger Breazeale (17-0, 15 KOs) headlines a card at The O2 in London, which will be shown live on Sky Sports Box Office in the U.K. and on Showtime in the U.S.

While both fighters are thus far unbeaten as pros, the 2012 Olympic gold medalist Joshua is a big favorite in this fight. Joshua is viewed by many as the heir apparent to the title of world heavyweight champion, and as the next major international superstar in boxing.

We spoke with them on a media conference call Wednesday.

With all the hype and prognostications about his future, Anthony Joshua is trying to stay focused on one thing: boxing.

"I only see great things if I stay locked away in the gym," he said.

For his part, Dominic Breazeale is not intimidated by the hoopla surrounding his opponent.

"It's great," he said. "All the distractions are on Anthony. It's something he's got to deal with."

And we discussed when Anthony Joshua might fight in America, his new deal with Showtime, and more.